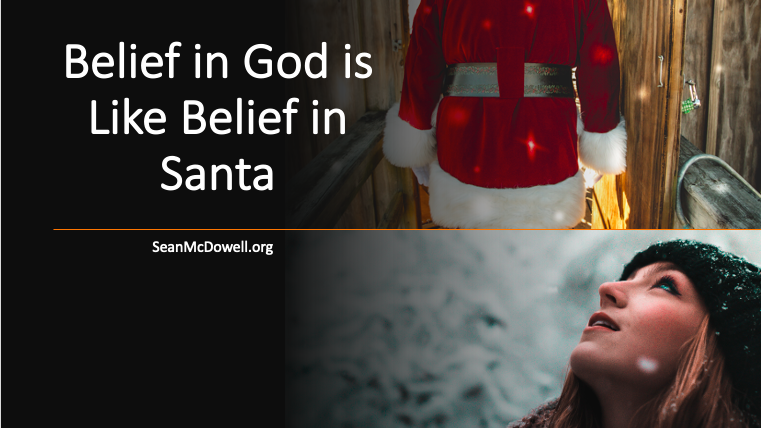 Along with my regular posts at SeanMcDowell.org, I also occasionally feature some of my former students in the Biola Apologetics Program. This post is by my friend Timothy Fox, who helped me with both the Awana Advocates curriculum and the updated and revised Evidence that Demands a Verdict. He also blogs at Free Thinking Ministries and you can follow him on Twitter at @TimothyDFox. Enjoy!

Christmastime should be when we all wind down and enjoy some peace and quiet with family and friends. Christian apologists, however, go into overtime, as this is the season where many skeptics increase their attacks on Christianity. They’ll say things like believing in God is no different than believing in Santa, dismissing theism as a mere child’s fairy tale. While many apologists may be quick to rebut this claim (see this, this, and this), I’ve actually started to agree with it. Believing in God is like believing in Santa. Here’s a great illustration why, using a scene from one of my favorite Christmas movies, Elf:

When Buddy’s adopted father says that many people have stopped believing in Santa, Buddy asks who they think put toys under the tree. Even the childlike Buddy understands that presents don’t just magically appear beneath the Christmas tree, but they must have been put there by somebody. It’s a commonsense truth that even children can understand. When kids outgrow belief in Santa, they realize that mommy and daddy must have been putting presents under the tree all along.

A belief worse than magic

Now, certainly this doesn’t apply just to presents beneath the tree or goodies in stockings. What about the trees and stockings themselves? Christmas decorations don’t just appear from nowhere, they are put up by people. But we’re still thinking too small: What about the entire universe? Somehow, this is when many otherwise-intelligent people start believing in magic - actually, worse. Many naturalists - people who believe that the natural world is all that exists - think that the entire universe simply popped into existence uncaused for no reason. But as Christian apologist William Lane Craig argues, this belief is worse than magic:

“I mean, in magic when the magician pulls a rabbit out of the hat, at least you've got the hat and you've got the magician but in this case the universe is just supposed to have popped into being out of absolutely nothing which is surely metaphysically absurd.”

The reason for the season

This is why believing in God is like believing in Santa. Even the youngest child knows that presents don’t simply appear beneath the tree, but they must have been placed there by a person. Therefore, isn’t it reasonable to think that the entire universe was also brought into existence by a Person? Belief in God is not silly or childish; it’s completely logical and reasonable. The argument given here, known as the cosmological argument, is just one reason of many to believe that God exists and that Christianity is true.

So the next time a skeptic says that believing in God is like believing in Santa, you can wholeheartedly agree with him. Then, use the opportunity to share a powerful reason to believe that God does exist, the God who came down to dwell among us.