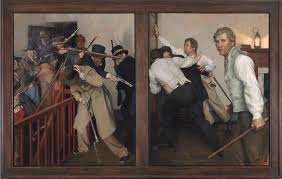 Was Joseph Smith a Martyr?

In my recent book The Fate of the Apostles, I make the historical case that the apostles were all willing to suffer and die for their belief that they had seen the risen Jesus. This does not prove the truth of their claims, but that they were sincere. But what about Joseph Smith? Didn’t he die as a martyr for his faith? Does that mean he was equally sincere, and hence Mormonism may be true as well?

The Story of Joseph Smith

Joseph Smith (1805-1844) is the founder of Mormonism. At the age of fourteen, he claimed to have seen a vision[1] of God the Father and Jesus who told him not to follow any of the sects of his day but that God would restore the true church through him. He was later directed by the angel Moroni to discover some gold plates, which contained the spiritual history of the Nephites and Lamanites, including a visit by Jesus to the Americas. He claimed to have received revelation from God for the translation of the Book of Mormon, a scripture that is claimed to complete the message of the Bible.

In 1839, Smith and his followers moved to Nauvoo, Illinois. Under his leadership, the city of Nauvoo prospered. Five years after moving to Nauvoo, some disaffected Mormons publicly criticized Smith in the Nauvoo Expositor for his unprophetlike behavior. Smith ordered the city marshal to destroy the press, but one of the men responsible for the press filed a complaint. Smith was eventually charged with treason by the state of Illinois and he and his brother Hyrum turned themselves in on June 25. They were placed in a low-security prison in the Carthage Jail, about twenty-two miles outside Nauvoo, along with their companions Willard Richards and John Taylor. Both Joseph and Hyrum possessed smuggled pistols. On June 27, 1844 a group of armed men with painted faces stormed the Carthage Jail, and in a short gun battle, Joseph and Hyrum ended up dead.[2]

Many Mormons have since heralded Joseph Smith as a martyr. Doctrine & Covenants 135:4 says,

When Joseph went to Carthage to deliver himself up to the pretended requirements of the law, two or three days previous to his assassination, he said, “I am going like a lamb to the slaughter; but I am calm as a summer’s morning; I have a conscience void of offense towards God, and towards all men. I SHALL DIE INNOCENT, AND IT SHALL YET BE SAID OF ME—HE WAS MURDERED IN COLD BLOOD.”

According to Brigham Young,

He [Joseph Smith] holds the keys of that kingdom for the last dispensation—the keys to rule in the spirit-world; and he rules there triumphantly, for he gained full power and a glorious victory over the power of Satan while he was yet in the flesh, and was a martyr to his religion and to the name of Christ, which gives him a most perfect victory in the spirit-world.[3]

There is no question Smith was morally justified in defending himself. The important question is whether or not Smith qualifies as a martyr who can be compared to the apostles, or Jesus (as Mormons claim). Two important points stand out when analyzing his fate. First, Smith claims he was led “like a lamb to the slaughter.” Jesus willingly gave up his life without a struggle (John 10:18). He had the power to free himself and harm his attackers but he resisted (John 19:11), but Smith accepted a weapon while in jail and used it to shoot at his attackers, two or three of which reportedly died.[4] How can his actions rightly be compared to those of Jesus? Second, it is questionable if Smith was innocent of the charges brought against him. He had been guilty of polygamy, including relationships with teenage girls and married women.[5] He had been accused of abusing power and was responsible for ordering the destruction of the Nauvoo Expositor. He certainly deserved a fair trial, but there is no reason to believe these were trumped up charges without merit. Bill McKeever and Eric Johnson conclude,

He was considered by many in the community to be a scoundrel, and it was his disgusting behavior that created the conflict when the publishers of the newspaper exposed him. He was sent to jail because he was an assumed lawbreaker—charged with riot—and he died as a result of a brief firefight in which he participated, willingly using deadly force. Mormons are certainly free to insist that their founder perished as a martyr, but the facts lead a dispassionate observer to a different conclusion.[6]

Even though the case for Smith being a martyr has been seriously compromised, outsiders at the Carthage jail unjustly attacked him and he did die as the founding prophet of the LDS faith. While he did attack and reportedly kill some men, he was also acting in self-defense. Should his example not provide evidence for the sincerity of his claims regarding the founding of the Mormon Church just as the deaths of the apostles provide evidence for the sincerity of their claims to have seen the risen Jesus?

The Apostles vs. Joseph Smith

Probing into the lives and motivations of the apostles shows a significant difference between them and Joseph Smith. When initially choosing to follow Jesus, the apostles believed they were going to reign in power with him in Israel, which is why James and John made their requests to Jesus, “Grant us to sit, one at your right hand and one at your left, in your glory” (Mark 10:37). They believed Jesus would be a military and political ruler like David, and they would share in his reign. Yet their hopes were dashed at his arrest and crucifixion (Luke 24:21). They went back to their lives as before, hoping the real messiah would eventually come. Even though Jesus had predicted it, they had no expectation of his resurrection. Reports of the empty tomb and risen Jesus were not enough—they needed an actual appearance of Jesus to be persuaded it was true (cf. John 20:24-29). By following the resurrected Jesus, the apostles willingly embraced a religion that would involve sacrifice, service, humility, and likely death. They did it not for personal gain, but because they had seen the risen Jesus and feared disobeying God more than the wrath of men (Acts 5:27-32).

In contrast to the apostles, serious questions can be raised against the motivation of Joseph Smith. He was clearly enamored with power, sex, and money. As for power, Smith built a militia of 5,000 men (which was more than half the size of the US Army). He was also a politician, campaigning for the presidency until the time of his death. As for sex, Smith had at least 33 wives, including four sister-pairs (Huntington, Patridge, Johnson, Lawrence), eleven polyandrous unions with women already married, one mother-daughter pair (Sessions), and some girls as young as fourteen.[7] As for money, Smith claimed to have received a prophecy to start a bank in Kirtland, Ohio. He was the personal cashier for the bank. Even though he promised his followers it would succeed, it eventually failed and some members of the church lost everything they had.

These factors do not necessarily prove Smith was lying, but they raise serious questions about his motivation, character, and the claim he was a martyr. The apostles willingly embraced sacrifice and suffering because they were convinced Jesus had risen from the grave. There is no evidence whatsoever they embraced the faith for material gain. As the first chapters of Acts demonstrate, it cost them considerably to follow Christ. In contrast to the apostles, Smith had much to personally gain by propagating his church.

The First Followers of Mormonism

What about the first followers of Mormonism? The Book of Mormon begins with the three witnesses (Oliver Cowdery, David Whitmer, and Martin Harris) and the eight witnesses (Christian Whitmer, Jacob Whitmer, Peter Whitmer, Jr., John Whitmer, Hiram Page, Joseph Smith, Sr., Hyrum Smith, and Samuel H. Smith) who testified that they have seen the engravings on the plates. However, in reality it appears that none of these witnesses actually saw the plates with their naked eyes.[8] They all saw the plates “spiritually.” In his review of No Man Knows My History, by Fawn M. Brodie, Mormon historian Marvin S. Hill writes,

What of the prophet's story about gold plates, and what about his witnesses? Given Brodie's assumptions, was there not deception here, if not collusion? Brodie maintains that the Prophet exercised some mysterious influence upon the witnesses which caused them to see the plates, thus making Joseph Smith once more the perpetrator of a religious fraud. The evidence is extremely contradictory in this area, but there is a possibility that the three witnesses saw the plates in vision only, for Stephen Burnett in a letter written in 1838, a few weeks after the event, described Martin Harris' testimony to this effect: “When I came to hear Martin Harris state in public that he never saw the plates with his natural eyes only in vision or imagination, neither Oliver nor David . . . the last pedestal gave way, in my view our foundations.”[9]

According to Mormon Church history, Joseph Smith was the only one who physically saw the golden plates. Unlike the twelve apostles (and Paul and James the brother of the Lord), there was only one witness to the plates, and as seen, this witness had questionable motivations. Despite popular Mormon claims, there is little reason to consider Joseph Smith a martyr whose death provides evidence for the truth of his religious claims.

Sean McDowell, Ph.D. is a professor of Christian Apologetics at Biola University, a best-selling author of over 15 books, an internationally recognized speaker, and a part-time high school teacher. Follow him on Twitter: @sean_mcdowell and his blog at seanmcdowell.org.

[1]According to the LDS Church, Smith saw a “heavenly manifestation” of God the Father and Jesus Christ. For a description of the first vision, see The Church of Jesus Christ of Latter-Day Saints, “First Vision Accounts,” accessed April 14, 2014, [2]Brigham" class="redactor-autoparser-object">https://www.lds.org/topics/fir... Young University, “History of the Church,” 6:618, accessed April 14, 2014, https://byustudies.byu.edu/hc/hcpgs/hc.aspx .

[8]Doctrine and Covenants 17:2-5 says, “And it is by your faith that you shall obtain a view of them [the plates], even by that faith which was had by the prophets of old. And after that you have obtained faith, and have seen them with your eyes, you shall testify of them, by the power of God; And this you shall do that my servant Joseph Smith, Jun., may not be destroyed, that I may bring about my righteous purposes unto the children of men in this work. And ye shall testify that you have seen them, even as my servant Joseph Smith, Jun., has seen them; for it is by my power that he has seen them, and it is because he had faith.” The Church of Jesus Christ of Latter-Day Saints, The Doctrine and Covenants (Salt Lake City: The Church of Jesus Christ of Latter-Day Saints, 1835). A few troubling questions emerge from this account: Why do they need faith to see the plates in the first place? Smith was already in the process of translation, so why not simply show them the plates? Since faith was necessary to have permission to see the plates, is it not likely that “seeing” the plates also took an act of faith? Why would prayer be necessary to see a physical object?