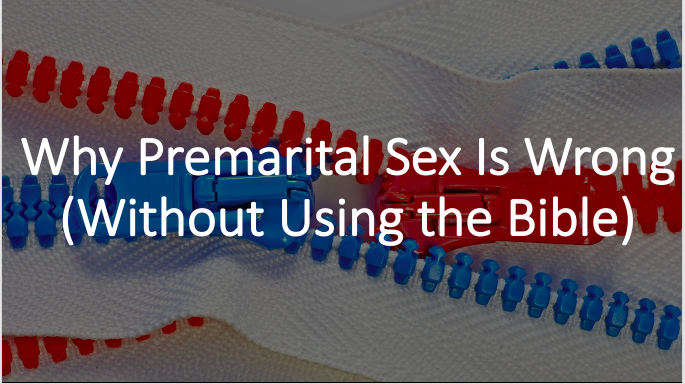 Is Sleeping with Someone Outside Marriage Wrong? (A Case without Using the Bible)

Recently a young man asked me if I could make a case for the moral wrongness of premarital sex without using Scripture. I simply said: Premarital sex is wrong, because you shouldn’t lie. He didn't expect me to say that, and I'm guessing that may be true for you too.

A lie involves saying something that is not true. To lie is to knowingly convey a false view of reality. When we properly understand the meaning of sex, and what it communicates between two people, this is what premarital sex does. Let me explain.

We even talked about the meaning of a kiss, and how a kiss on the cheek communicates something different than a kiss on the forehead. While they debated the meaning of various kinds of kisses, they concluded that a French kiss implies romantic intentions and exclusivity by its very nature.

Lying with Our Bodies

In sum, they all agreed that bodily actions carry intrinsic meaning. Thus, they also agreed that it is possible to lie with our bodies. Here is how I put it in Chasing Love:

“Suppose a used-car salesman sells you a car while withholding a problem with the transmission, and then shakes your hand. Did he lie with his body? Of course. Imagine smiling and hugging someone you deeply dislike. Are you communicating something you don’t really feel? What about a wink at someone you are not attracted to? Is that a lie? It certainly can be.”

Don’t we all know that sex means these things, even if we choose to act differently? In the 2001 psychological thriller Vanilla Sky, Tom Cruise plays the role of a rich business owner who falls in love with a girl he meets at a party. When his current lover finds out they slept together, she begins stalking him. In one of the more memorable lines from the film, she says, “Don’t you know that when you sleep with someone, your body makes a promise whether you do or not.”

Why Premarital Sex Is A Lie

So, why is premarital sex lying? Because the physical act of sex communicates trust, exclusivity, and permanence, and yet these are only matched relationally in marriage when someone has said, “I do.”

To engage in premarital sex is to communicate one thing with your body but fail to match it up with your words. Isn’t that a lie?

If you’re looking for a biblically-based and timely resource on sex, love, and relationships, check out my latest book for students: Chasing Love: Sex, Love, and Relationships in A Confused Culture.