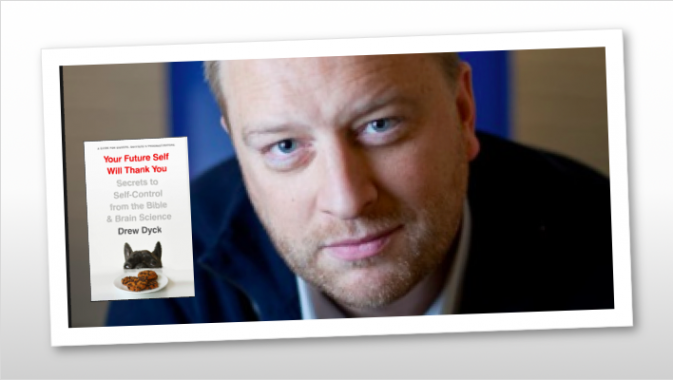 What's the Secret to Self-Control? Scientific and Biblical Wisdom

What's the Secret to Self-Control? Scientific and Biblical Wisdom

My friend Drew Dyck has written a new book that instantly caught my attention. The provocative title is Your Future Self Will Thank You. Unlike some books (or sermons) on the topic, it is not guilt-induced or moralistic. Rather, it is Scriptural and compassionate. And he even makes an application for apologetics and evangelism (woo-hoo!).

If you struggle with self-control (in other words, if you’re human!), this is a book that will interest you. Check out my brief interview with Drew and consider getting a copy of his excellent book.

SEAN MCDOWELL: You describe self-control as “a foundational virtue.” What do you mean by that?

That was a big realization for me. In the past when I’ve been frustrated by my lack of progress in my spiritual life, I assumed I needed more knowledge. But usually a lack of knowledge wasn’t the culprit. I knew what I needed to do. What I needed was more self-control.

MCDOWELL: Last year we saw the #Metoo movement burst on the scene. Was seeing those scandals unfold part of reason you decided to write about self-control?

DYCK: The #Metoo movement was unfolding as I wrote. For a while there it seemed every day brought new revelations of a high-profile person being accused of sexual assault or harassment. For me it was a grim reminder of the importance of this topic. A lack of self-control has dire consequences. And it’s not just Hollywood executives and politicians who need the warning. For all of us, even a momentary break in willpower can cause irreversible damage.

Self-control is also instrumental in the little, day-to-day decisions we make. Are you going to get up early and exercise, or slap the snooze? Are you going to surf the web for a couple hours or dive in and make progress on that report? There are times where it’s perfectly okay to just veg out. We need down time. But too often we choose the easier option rather than doing things that would ultimately enrich our lives, help others, and foster growth. And typically, the difference doesn’t amount to ignorance of what choice is better; it’s usually a matter of self-control.

MCDOWELL: How does self-control relate to apologetics?

DYCK: I think it’s crucial in a couple of ways. First of all, so many critiques of Christianity involve pointing out the hypocrisy of Christians. Frankly, it drives me nuts. Christianity is the largest religion on earth. Of course there are bad Christians out there! But increasingly, rather than arguing against God’s existence or the resurrection, skeptics score points by detailing the sins of believers. Whether or not that’s a legitimate approach is beside the point. When Christians behave badly it provides fodder for these kinds of attacks—and it gives people an excuse to dismiss the faith. That’s one reason we need to exercise self-control. It undermines these kinds of attacks.

I find it interesting that when the Apostle Paul appeared before the Roman Governor, Festus, he discussed self-control (Acts 24:25). We don’t know exactly how that conversation went, but we know that Paul believed that “righteousness, self-control” were relevant to a defense of the faith. That’s certainly true today as well.

MCDOWELL: What are some challenges the younger generation faces in this area?

DYCK: The West is a culture that prioritizes self-expression over self-control. I’m not saying self-expression is a bad thing, but we have taken it to the extreme. It now seems that repressing almost any desire or impulse is seen as a moral wrong.

For a generation that has grown up in this culture, and been fed a never-ending stream of clichés about “following your dreams” and being “true to yourself,” it can be difficult to exercise restraint. The very idea that the self should be controlled seems alien. To develop self-control means swimming upstream against this powerful cultural current.

MCDOWELL: How can we cultivate self-control in a time when we’re inundated by technology and new media?

Second, the constant distraction is changing our brains. Our attention spans have shrunk and we’re addicted to novelty. The other day I got stuck in line at Chipotle for twenty minutes and made a horrifying discovery: I didn’t have my phone with me. I grew uneasy. My hand kept searching my pockets in vain for the glowing device. I was shocked by just how hard it was for me to stand there with nothing to do.

That’s a problem. We find boredom almost unendurable. And boredom is a prerequisite to spiritual growth. Let’s face it, spiritual disciplines—like prayer and Bible-reading—are difficult. They’re not always entertaining, especially at first. That’s why it’s so crucial to exercise self-control when it comes to your media consumption. Make some hard-and-fast rules about when you’re going to log off. That’s not legalism. That’s just wisdom. By limiting your time online, you give God the space in your life to cultivate the virtues He longs for you to have, including self-control.