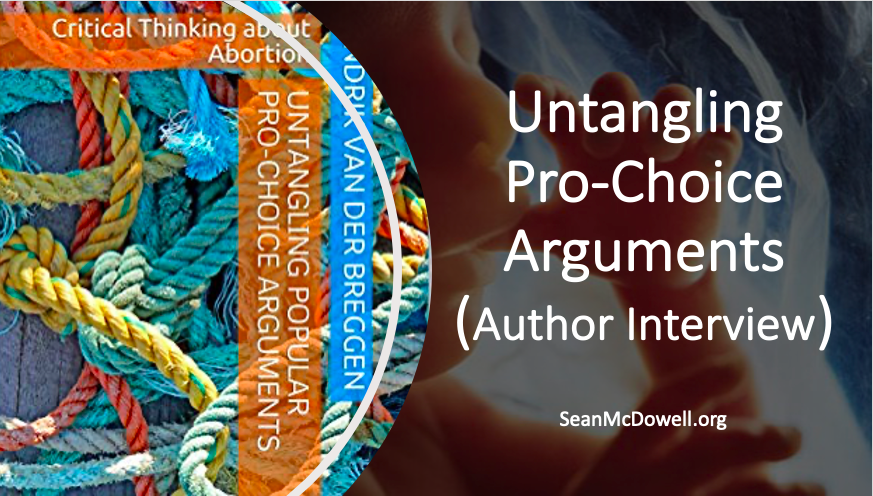 Recently Canadian professor Hendrik van der Breggen contacted me about his new book Untangling Popular Pro-Choice Arguments. I was unsure what to expect, but eventually blown away when I read it. It is the most readable and well-argued book I have seen that responds to the top pro-choice arguments. If you care about defending the unborn, this is an insightful and useful resource. Check out this brief interview and think about getting a copy of his excellent book.

SEAN MCDOWELL: How did you get involved in the abortion issue?

HENDRIK VAN DER BREGGEN: Through my awareness of logic—or, rather, illogic. The faulty, tangled-up arguments for abortion drew me into the issue. In the mid-1980s there was much public discussion about abortion in Canada (where I live) leading up to Canada’s law protecting the unborn getting struck down in 1988 (making abortion legal throughout all nine months of pregnancy). What caught my attention was the terrible, terrible argumentation set out in favor of abortion.

Here is a quick example. Canada’s leading abortionist Dr. Henry Morgentaler (who was hugely influential in helping to strike down Canada’s law protecting the unborn) argued as follows in 1985 at the University of Alberta: Just as a brick isn’t a house, so too the single-cell human embryo isn’t a human being, so just as it’s no big deal to get rid of a brick, it’s no big deal to destroy the human embryo. But this is a terribly faulty analogy!

The significant dissimilarity is this: The brick doesn’t grow into a whole house whereas the embryo grows into its later stages (infant, toddler, adolescent, etc.). If you actually had a brick that grows into a house complete with furnace, air conditioning, blue curtains, a super-computer, plus plumbing (plumbing that, unfortunately, leaks for the first couple years), you wouldn’t destroy that brick! I had become a serious follower of Jesus shortly before this time (at age 30) and God placed a burden on my heart for the least of “the least of these”: unborn children. So, I began to speak up—gently and respectfully, but also forcefully, using evidence and reason.

MCDOWELL: What do you think is the strongest pro-choice argument? And what’s your rebuttal?

VAN DER BREGGEN: I think the strongest pro-choice argument generally is the large, seemingly overwhelming tangled-up web that consists of many intellectual knots. My rebuttal: untangle the knots, one at a time. Hence, my book.

More specifically, I think the strongest single pro-choice argument is that unborn human beings aren’t persons because they lack higher-order capacities (i.e., for consciousness, having desires). My rebuttal: The problem with this argument is that the unborn do have these capacities—in radical/root form. It’s just that they’re not yet immediately exercisable. They merely have to blossom. The fact is that pre-natal human beings will exercise these capacities, if we don’t kill them. So, just as we shouldn’t kill people who are sleeping or in reversible comas because their higher-order capacities are not immediately exercisable—but they will be immediately exercisable if we don’t interfere—so too we shouldn’t kill unborn children. For more arguments on this matter, see my book.

MCDOWELL: How do you respond to the common claim that abortion should be legal because a woman has a right to bodily autonomy?

MCDOWELL: What is the simplest case for pro-life?

VAN DER BREGGEN: I think that if we’re talking about destroying something, we should first figure out what that something is. What is it? In abortion, what’s being destroyed isn’t merely a clump of cells or a mess of tissue or an appendix, it’s a genetically distinct living human being. Science tells us that, and that’s significant. What’s also significant are these points: (1) there are good reasons for thinking the pre-natal human being is a person because it’s a human being; (2) arguments that it’s not a person fail or are deeply problematic; and (3) if we aren’t sure whether or not it’s a person, then we should err on the side of not killing it.

Think of it this way: If we’re out hunting and we’re not sure whether what’s rustling in the bush is a deer or a fellow hunter, and if in fact we have pretty good evidence for thinking it’s a fellow hunter, then it would be wise—morally incumbent on us—not to shoot. If we think human rights are important for all members of the human family, and if evidence strongly points to unborn children actually being members of the human family, then, in the name of equality and inclusivity, we should include—protect—the unborn child.

VAN DER BREGGEN: No, it’s not. Sure, our religious views can underwrite our position and motivate us to act (and properly so), but abortion is also a public human rights issue, whether one is religious or not. In fact, there are non-religious groups that are anti-abortion: e.g., Secular Pro-Life, Atheists for Life, and Feminists for Life. As I mentioned, if we think human rights are important for all members of the human family, then, in the name of equality and inclusivity, we should include the unborn. They are, in fact, human beings, regardless of one’s religious views.

Also, if we don’t include them, then human rights—especially the right to life—get ungrounded. The faulty reasoning that permits the killing of pre-natal human beings is bad enough in itself: it wrongly permits their deaths. But, if accepted and left unchecked, that faulty reasoning transfers to other human beings who are vulnerable. Born infants, people who are weak, unwanted, or mentally handicapped become targets. For example, “every child a wanted child” justifies not only abortion, but also the destruction of other unwanted children (so now we see newborns, a.k.a. “abortion survivors,” being allowed to die; ethicists are also arguing for “post-birth abortions”). Moreover, history has shown that whenever we accept that some human beings aren’t persons, disaster ensues. The powerful tend to trample over the weak. Indeed, think of when these reasons for denying personhood to fellow human beings were acceptable: skin colour, gender, ethnicity, and political ideology. The result was suffering and death. Lots of it. Today it’s an issue having to do with including the smallest and weakest of us within the human family—and protecting them. AND it’s an issue of helping mothers who feel socially pressured into thinking that abortion—killing their child—is their only option. But social problems require social solutions, not killing children. Surely, that’s not a religious issue.