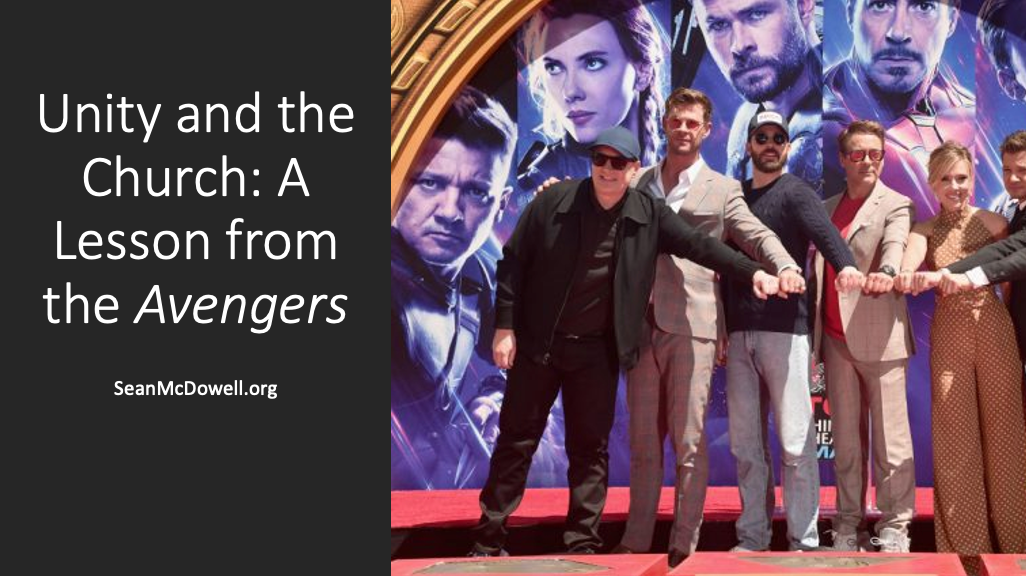 Unity and the Church: A Lesson from the Avengers.

It’s no secret that our culture is deeply divided today. A friend I greatly respect said she would not be surprised if the U.S. separated into various subdivisions in the not-too-distant future. Whether this happens or not, she is certainly right that the U.S. is the most divided it has been in a long time. Sadly, prospects for unity seem remote.

One of Satan’s biggest strategies is to create disunity amongst believers. Why? For one, if we Christians are fighting against each other, then we won’t have a united front to collectively advance God’s kingdom. His goal is to turn our energy and focus within so we cannot focus them without.

Disunity and the Avengers

This is exactly the approach Loki takes as the villain in the first Avengers movie (2012). In this film, Loki plays a Satan-type figure who “possesses” people with his scepter (including Hawkeye), wants human beings to worship him, and is intent on world domination.

What is his plan to defeat the Avengers? Simple: Create disunity amongst them so they cannot adequately defeat him. Specifically, he aims to release the Hulk against the Avengers, so they have to expend their energy containing the Hulk rather than defeating him and defending Earth.

It’s a brilliant plan. And this is exactly why the Bible has a lot to say about the importance of unity. If we Christians expend our energy and focus bickering within, we will be less effective loving and reaching those without.

Disunity in the Corinthian Church

Recently I have been studying 1 Corinthians, and it is remarkable how much Paul talks about the importance of unity. The reason was simple: The Corinthian church was plagued with disunity. It was divided over lawsuits (6:1-8), how to deal with food offered to idols (8:1-11:1), the practice of the Lord’s Supper (11:7-34), the nature of spiritual gifts (12:1-14:40), and much more.

This is why Paul begins his letter with a plea for unity: “I appeal to you, brothers, by the name of our Lord Jesus Christ, that all of you agree, and that there be no divisions among you, but that you be united in the same mind and the same judgment” (1:10).

What’s the solution to disunity? According to Paul, unity comes from proper focus on the cross, which humbles human beings and glorifies God.

In his commentary on 1 Corinthians, professor Tom Schreiner notes, “Every area of dispute and every matter dividing believers must be recalibrated and rethought and lived out in the light of the truth that Jesus Christ is the crucified and risen Lord” (p. 12).

Disunity and the Cross

How does the cross help bring unity? For one, it humbles us. We realize that our ultimate goal is not to win arguments but to love other people by dying to ourselves just as Christ died for us. It helps recalibrate us to sacrificially love other people rather than focus on our own glory or gain.

Second, the cross is a reminder of how deeply sin affects us. Sin is not “out there” but “in here.” The cross reminds us that we are desperate sinners in need of redemption and thus prone to self-deception (Rom 3:23; 1 John 1:8). The cross reminds us­–you and me–of the need for humility since we too are in need of correction.

When we see disunity in the church, let’s remember the cross. It humbles us and reminds us of what matters most.

If you are looking for a resource that defends core issues in the Christian faith–the deity of Christ, the resurrection, and the reliability of the Bible–check out the updated Evidence that Demands A Verdict.