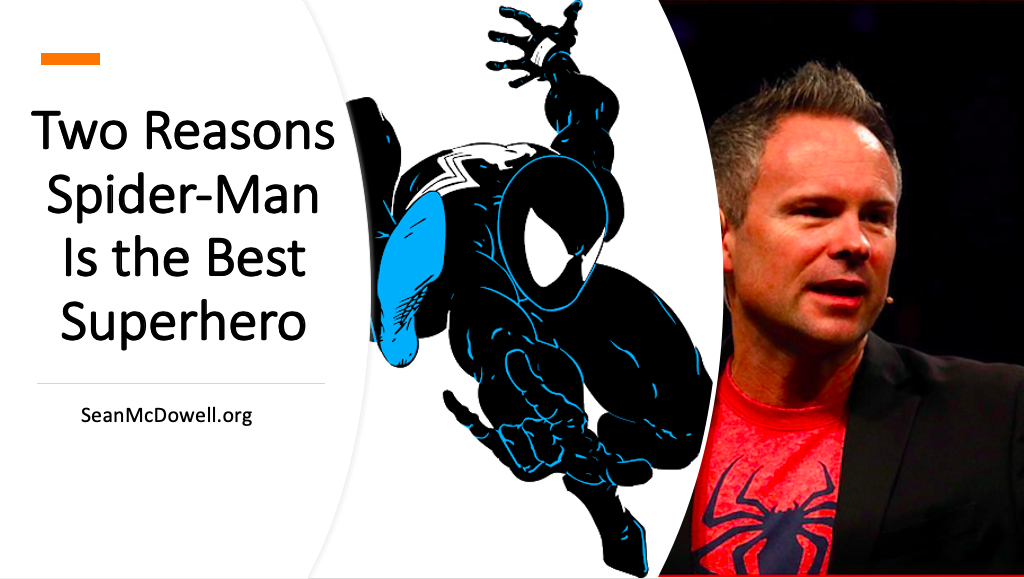 It’s no secret that I love superheroes. I regularly wear a Marvel or DC shirt while speaking, weave superhero illustrations into my talks, and love talking about the latest superhero movie. And yes, I saw Avengers: Endgame with my kids on opening night!

Yet of all the superheroes, Spider-Man is (by far) my favorite. Here’s two reasons why I think he's the best superhero:

Spider-Man is a relatable character. Even though he has amazing superpowers, there is something very normal about Spider-Man. He can defeat Venom, but has a hard time delivering a pizza on time. He conquers a range of villains but struggles to relationally connect with Mary Jane.

Yet I never felt the same connection with other superheroes. Did you? I love the Hulk, and though sometimes I lose my cool, inner rage is not my core struggle. Although Batman is a symbol of hope, I am not obsessively motivated (or haunted) by the murder of my parents. And while Iron Man is a science-genius, I am not a billionaire. And my suspicion is that neither are you.

I love these characters, but don’t relate to them on a deep level. But Spider-Man is different.

When I began collecting comics in Junior High, I was instantly drawn to Peter Parker the student and Spider-Man the superhero. As funny as it may sound, I could imagine myself actually being the web-slinging crusader in and out of costume. Can't you?

Most superheroes are relatable on some level. But for me, Spider-Man is the ultimate relatable character, which is one reason he’s my favorite.

Reason #2: Spider-Man Has a Christian Ethic

Spider-Man is driven by an ethic in line with the Christian faith. Let me explain.

Stan Lee brilliantly gave motivating ethics to his characters. Iron Man is the tortured billionaire, who had a tough childhood, yet ultimately wants to help people. Although he has an animal instinct, Wolverine is both loyal and protective. And Captain America is an all-American boy scout.

The motivating ethic of Spider-Man is captured by his uncle Ben, when he famously said, “With great power comes great responsibility.” Ben was trying to motivate Peter to recognize that his newfound superpowers were not to be used for his own gain, but to benefit mankind.

Interestingly, Jesus made a similar claim two thousand years ago: “Everyone to who much was given, much will be required” (Luke 12:48). Here’s the bottom line of what Jesus taught: We are responsible to use our gifts to glorify God and benefit others. Whether treasure, times, or talents, we are to use our gifts in outward service for the sake of God and others.

This ethic may be found in other religious systems, but it is undoubtedly at the heart of the Christian faith (1 Peter 4:10; Romans 12:6-8). And it is one more reason I love Spider-Man.

There are other reasons I love Spidey. I mean, come on, who doesn’t love his sarcasm?! But these are my top two.

How about you? Who’s your favorite, and why?

If you are looking for evidence that the Christian story is true, check out the updated version of Evidence that Demands a Verdict (co-written with Josh McDowell)