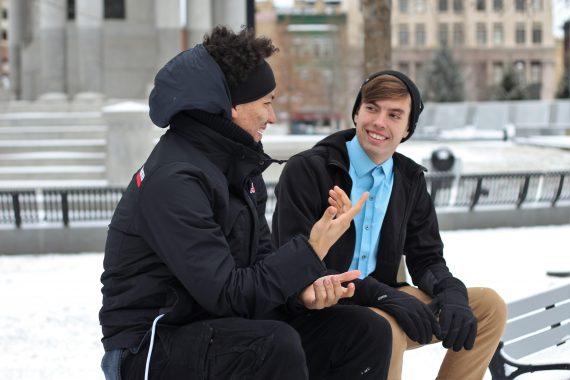 Tip for Sharing Your ﻿Faith: ﻿Choose Your Words Wisely!

Along with my regular posts at SeanMcDowell.org, I am now featuring some of my former students in the Biola Apologetics Program. This post is by my friend Timothy Fox, who helped me with both the Awana Advocates curriculum and the updated and revised Evidence that Demands a Verdict. He also blogs at Free Thinking Ministries and you can follow him on Twitter at @TimothyDFox. Enjoy!

Tip for Sharing Your Faith: Choose Your Words Wisely!

There are many things to keep in mind when sharing your Christian convictions with an unbeliever, such as your attitude, your tone, and even the specific words you use. Certain words common to evangelism, theology, and apologetics have accumulated cultural baggage that can hinder spiritual conversations. Let’s look at three such words and consider some alternatives.

1. "Faith" - Faith is a thoroughly biblical term. Salvation is by faith in Christ alone. But unfortunately, this word has loads of bad press: Faith is blind. Faith is believing without evidence or even in spite of the evidence. But this is not how the Bible uses the word faith. It is not merely believing or wishing; it is trusting in what you have good reason to think is true. So when sharing your Christian convictions, don’t use the word faith. Use trust instead. You trust in Jesus for your salvation. You trust the truthfulness and authority of the Bible. While the word faith is found all throughout the Bible and is the correct word to use in conversation with other Christians, it is better to use the word trust when engaging unbelievers. (For a good, brief discussion of this, watch this video by Greg Koukl.)

2. "Belief" - This is another recommendation from Greg Koukl. Throughout this article, I have avoided the phrase “Christian beliefs” and have used “Christian convictions” instead. Like faith, belief has a negative, wishful-thinking connotation to it. A belief is something you simply hold to be true without evidence, like believing in Santa Claus or the tooth fairy. It is often contrasted with knowledge, which is backed by justification and evidence. Therefore, use convictions instead. It is stronger and has none of the wishful shading that belief has.

3. "Philosophy" - Spiritual conversations will eventually move into deeper topics of theology and apologetics. And while I enjoy studying philosophy and understand its importance in the pursuit of truth, there are many who don’t share my appreciation. Some Christians view it as an unnecessary complication to the Gospel while some skeptics think philosophy is useless as a means of discovering truth. This is why I recommend avoiding the word altogether in general discussions. Instead, use logic or reason. Even the most ardent opponent of philosophy may claim to value logic and reason, so substitute those words in your spiritual conversations.

Take, for example, the cosmological argument for the existence of God, that God is the best explanation for the beginning of the universe. There are two types of evidence that the universe began to exist: scientific (Big Bang, Second Law of Thermodynamics) and philosophical (impossibility of an infinite regress). But instead of saying you have philosophical evidence that the universe began to exist, call it logical evidence. The reasoning is exactly the same but you are simply using a different word to describe it, one a skeptic may be less likely to dismiss. We aren’t avoiding philosophy itself, just the word.

When sharing your Christian convictions, don’t allow the discussion to go off track because of a baggage-filled word. Remove as many obstacles to the Gospel as possible, whether mental, emotional, or cultural. So, choose your words wisely!