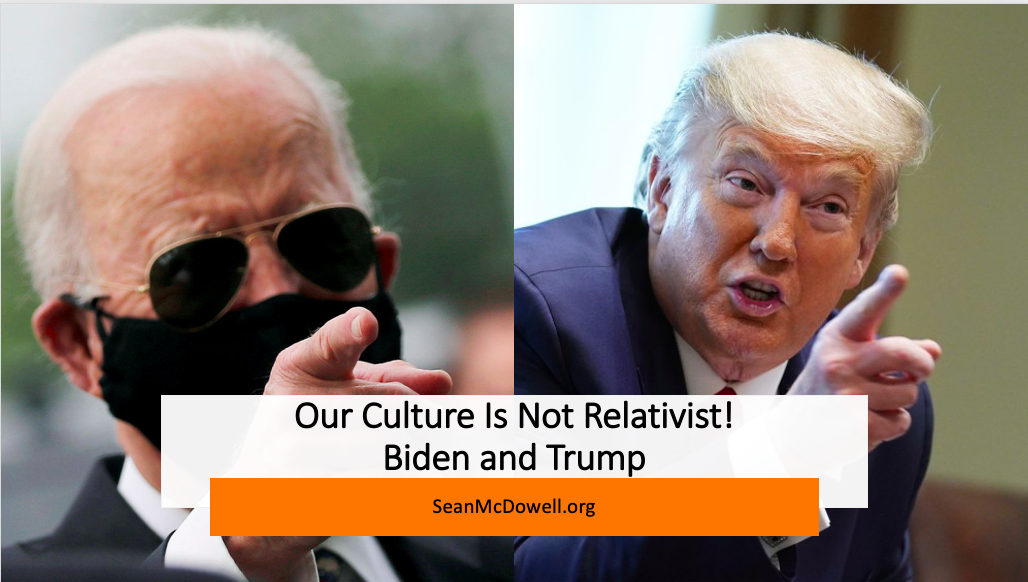 I think it’s the latter. If you listen to the rhetoric, it is clear that both sides of the political aisle are clawing for the moral high ground. Democrats and Republicans believe there are objective moral values and duties.

The Left and Relativism

Democratic candidate Joe Biden has vowed that he would not hesitate to issue a nation-wide lockdown order if scientists deemed it necessary. “I will be prepared to do whatever it takes to save lives,” said Biden, “because we cannot get the country moving, until we control the virus.” Sure, he thinks this is a winning electoral strategy, but he also thinks his position is morally superior to Trump’s. He claims this strategy will save over 40,000 lives.

Biden thinks we have a moral obligation to save lives, to get the economy moving, and that the best strategy might be to lockdown again. Whether you agree with his strategy or not, he believes his position is morally obligatory and superior to Trump’s.

The Right and Relativism

Trump is also trying to weigh the tension between opening the economy and protecting human life. One treatment Trump promoted is the use of hydroxychloroquine. According to Yale University epidemiologist Dr. Harvey Risch, the blocking of hydroxychloroquine in the U.S. may have cost 100,000 lives. Like Biden, Trump feels the moral obligation to protect lives and he offers a strategy he thinks will be effective.

My point is not about the effectiveness of either plan. That is another discussion. Rather, my point is that neither the Left nor the Right are actually relativists. Both Biden and Trump believe they have the moral high ground. They both embrace the moral duty to protect lives and believe that their plan is the best way of doing so.

People might try to relativize the beliefs of others as a way of dismissing them. But in reality, no one is actually a relativist. How do I know this? First, the apostle Paul reveals the answer in Romans 2:15: People have the moral law “written on their hearts.” Part of being human is knowing that right and wrong are real features of the universe. We know we shouldn’t steal. We know we shouldn’t lie. We know we shouldn’t take innocent human life.

Second, as C.S. Lewis observed in The Abolition of Man, certain common moral principles are found in various civilizations throughout world history. Sure, people may choose to disregard these moral rules. People may suppress them. But we all know moral values and duties are an objective feature of the world we live in, which is why we find them across national borders and across political parties.

We don’t live in a relativistic age. Transphobic. Racist. Science-denier. Homophobic. These are just some of the names people get labeled for holding the “wrong” moral viewpoint. These labels are meant to shame and to silence. The people who are characterized by one of these “phobias” are presumably on the “wrong side of history.” But this only makes sense if there is a “right” side of history. These criticisms only make sense if there is a design for how human beings are supposed to treat one another. These criticisms only make sense if there are objective moral values and duties.

Here’s the bottom line: No one is really a relativist. Democrats are not. Republicans are not. In reality, we all know there are moral duties and obligations. The elections make this clear.

The pressing worldview question is, “What does this tell us about the kind of world we live in?”

[1] People on the Left have other criticisms for those on the Right, but that is for another blog.

If you are looking for evidence that the Christian story is true, check out the updated Evidence that Demands a Verdict (co-written with Josh McDowell)