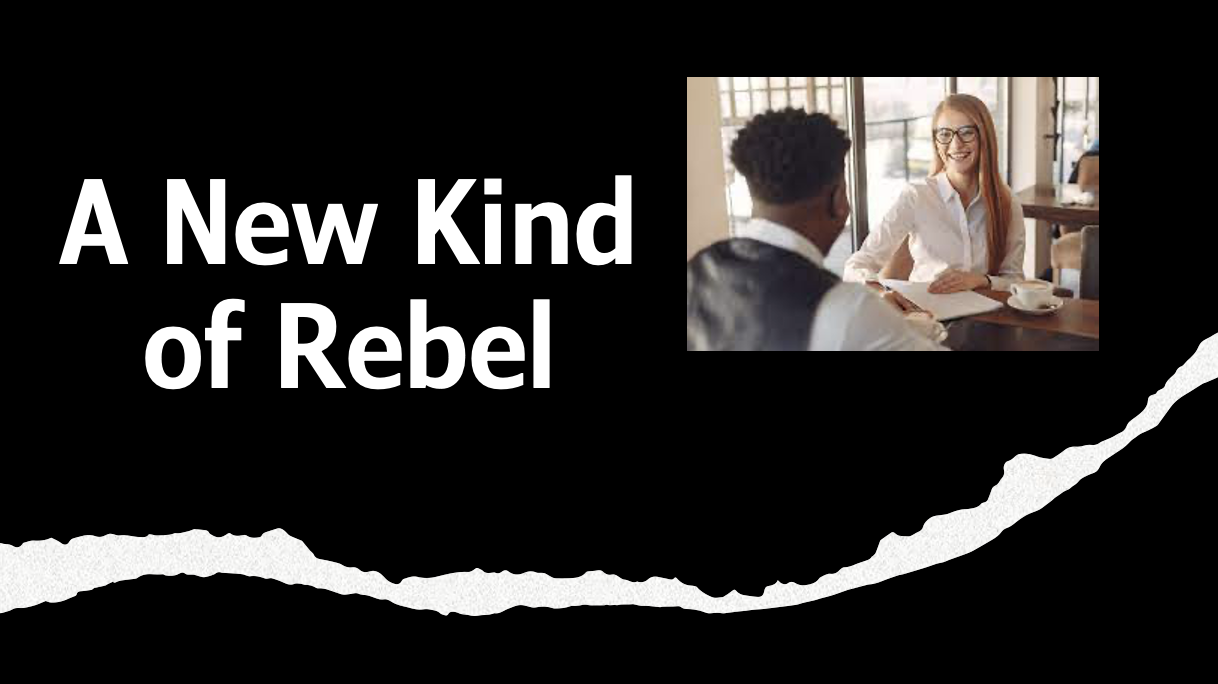 The Rise of Today's New Rebel

What comes to your mind when you think of a rebel?

Probably someone counter-cultural who fights against “the system.” To be a rebel is to stand in opposition. A rebel resists, denounces, and refuses to go along with the crowd.

The evolution of the rebel can be seen through a brief history of rock music. In the early 1950s, rock music encouraged rebellion against the fear of race-mixing. In the 1960s, rock stars rebelled against cultural norms of sexuality and drugs. And so on through the decades. Grunge. Punk. 80s rock. In different ways, the history of rock n roll captures the changing nature of the rebel.

Kneeling at the Flag

Not long ago, I interviewed a friend of mine on YouTube. Like me, Derwin Gray is an evangelical Christian committed to living out the teachings of Jesus in the Bible. But unlike me, he played in the NFL and he’s black. I interviewed him largely to hear how, as a pastor, he has grown one of the largest multi-ethnic churches in America.

Although I was somewhat hesitant, I asked him how he navigates sensitive racial issues, such as “taking a knee.” Of course, this gesture originated in a 2016 NFL football game, during which Colin Kaepernick and his 49ers teammate, Eric Reid, chose to kneel during the playing of the US national anthem, to call attention to the issues of racial inequality and police brutality.

I started by sharing the example of my grandfather, who served in World War II. As a high school student, I supported the right to burn the American flag. After all, it’s just a piece of cloth, right? But to my grandpa, the flag meant so much more. He risked his life for America. He had friends die in the war. To him, the flag itself stood for freedom. To burn it was to insult the very country it represents.

Can you see why I was concerned with the movement to take the knee?

When I shared this story with Derwin, his answer surprised me. First, he expressed his thanks to my grandfather for his service and that he understood why it would shape my views so deeply. But then he asked me to consider a different perspective. Derwin shared how 1.2 million black GIs did fight in World War II. Yet the promise of the GI Bill became an illusion to these soldiers. They came home to segregation, Jim Crow laws, and racism. He asked if I could understand why some might view taking the knee differently. He didn’t ask me to take the knee myself. He didn’t tell me I was wrong. He simply asked me to consider a different perspective.

Why am I sharing this story? The answer is simple: Rather than dividing into camps and demonizing those on the other side, what if we led by trying to listen, understand, and find common ground? What if we genuinely tried to show charity to others and see the world as they do so we could find solutions together? That would be contrarian. That would be rebellious.

I am not going to pretend this is always easy, or even possible. With certain issues, like abortion, there is no solution that pleases everyone. Our laws must be rooted in a position on the moral status of the unborn. Either the unborn are human or they are not, and either they have the right to life, or they don’t. It is impossible for the law to be neutral. And yet, even as we fight for our moral positions–given that human life is at stake–we can still do so in a way that is humanizing and loving towards our neighbors.

Still, on many contentious issues, such as critical race theory, immigration, and gun control, we could find far more common ground and collective solutions if we would lead with charity and understanding.

Ironically, there is really nothing new about this approach. The Pharisees wanted to cancel the “sinful woman,” but Jesus told her that her sins were forgiven and to go in peace (Luke 7:36-50). Zacchaeus was a rich tax collector who sided with the Roman occupiers. Yet amid criticism by his own people, Jesus dined with him. What happened? Zacchaeus repented of his wrongdoing and promised to restore those he had defrauded (Luke 19:1-10). Jesus loved both the oppressed and the oppressor.

Don’t mishear me. Jesus had such deep convictions about his mission that he was willing to die for it. He reasoned with people and called out hypocrisy. But he wasn’t motivated by clicks, views, or subscribers. He didn’t try to shock others so he could grow his following. When they wanted to forcefully make him king, he withdrew to pray (John 6:15). Sometimes he even said shocking things that shrank his following (John 6:22-66). Above all, Jesus was motivated by love.

That’s why Jesus is the ultimate rebel. He was a rebel in his day, and those who follow his example are rebels today. I speak to thousands of Gen Zers, and I am convinced that many are tired of the tribalism, name-calling, and divisiveness that characterizes modern culture. Many are looking for a new way to love their neighbors. They are looking to be rebellious in a new way.

Here’s the question: Will that be you?

Check out my latest book: A Rebel’s Manifesto: Choosing Truth, Real Justice & Love Amid the Noise of Today’s World.