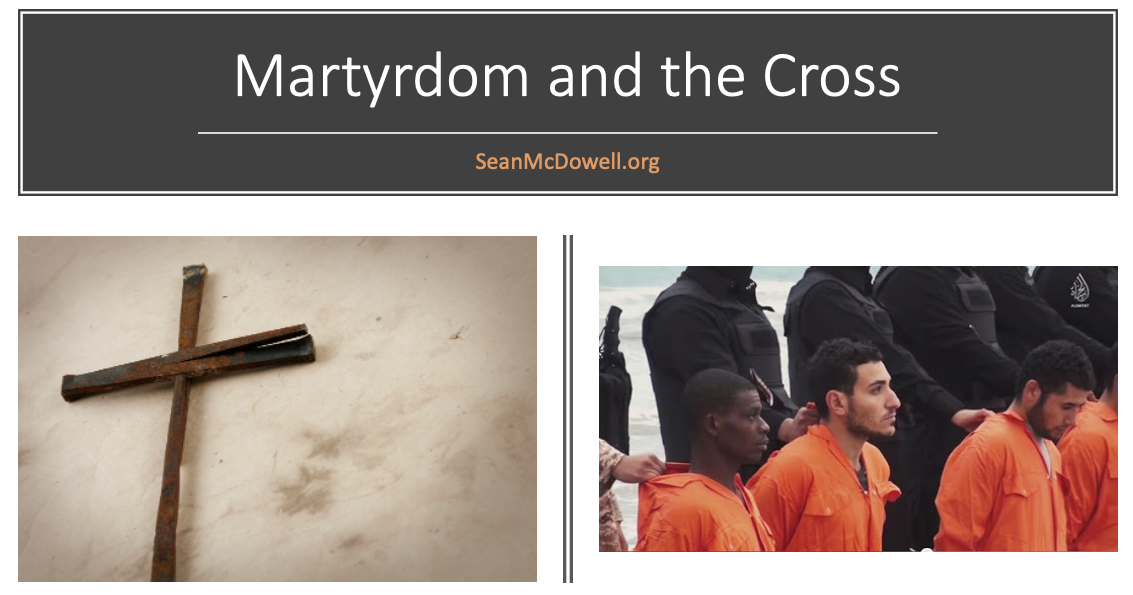 The Power of Martyrdom and the Cross: 3 Insights.

How do you respond when you hear a story of martyrdom? My guess is that it moves you powerfully. It certainly moves me.

I will never forget hearing about the twenty-one Coptic Christians who were kidnapped in Libya and beheaded by ISS soldiers on the beach. I stopped, wept, and could not get it out of my mind for days. I still think about it.

While I have written extensively on the evidential value of apostles being willing to suffer and die for their testimony, there is something intrinsically powerful about martyrdom itself. But what is it?

The Power of Martyrdom

While researching for the class I teach at Talbot on the problem of evil, I came across an article by Marilyn Adams (in the volume The Problem of Evil), in which she suggests that martyrdom is an expression of God’s love for the onlooker, potentially redemptive for the persecutor, and a vehicle of God’s goodness for the martyr.

At first, I was incredulous! How could martyrdom possibly be good for the martyr? But after reading and reflecting on the article, I think she is on to something. She makes three points regarding the power of martyrdom.

First, Martyrdom is an expression of God’s love for the onlooker. Someone who perseveres to the end through martyrdom offers an inspiring example to follow. Observers are challenged to see in themselves the type of person they ought to aspire to. Onlookers are moved to consider the following types of questions:

Do I have that kind of conviction? Am I as courageous? Would I offer my life for my most cherished beliefs? And so on.

These thoughts cross my mind, for example, when I consider the last scene in Braveheart. The willingness of William Wallace to lay down his life, through utter torture, is inspiring and convicting.

Consider the Roman guard in the Gospel of Mark. Jesus had been mocked, whipped, and crucified. Right after he breaths his last breath, the centurion, who was facing him said, “Truly this was the Son of God” (Mark 15:29). It took the death of Jesus as a martyr to wake up the centurion to recognize his identity.

This was at the heart of the civil rights movement led by Martin Luther King, Jr. Activists would allow themselves to be harmed to reveal (in part) the brutality of the oppressors. In their violent against demonstrators, some oppressors might be led to repentance.

“For the potential religious martyr, the threat of martyrdom is a time of testing and judgment. It makes urgent the previously abstract dilemma of whether he loves God more than the temporal goods that are being extracted at a price. Especially if the price is high, he will have to struggle with his own divided loyalties. Whatever the outcome, the martyr will have had to face a deeper truth about himself and his relations to God and temporal goods than ever he could in fair weather.”

If this world is all there is, then this point makes no sense. But if knowing God personally and being conformed to His image are the highest goods, then it makes perfect sense.

The Power of the Cross

Adams is right: Martyrdom is spiritually powerful for the persecutor, the onlooker, and the one who is martyred.

And this is why the cross is so central to the Christian story. Through his death, Jesus offered the world the ultimate demonstration of love (John 15:13), he revealed the character of the persecutors (since they put to death the only innocent person who has ever lived), and he invites onlookers to repent and follow his inspiring example.

If you are looking for evidence that the apostles were wiling to suffer and die for their belief, and that some did die as martyrs, check out the updated version of Evidence that Demands A Verdict (co-written with Josh McDowell).