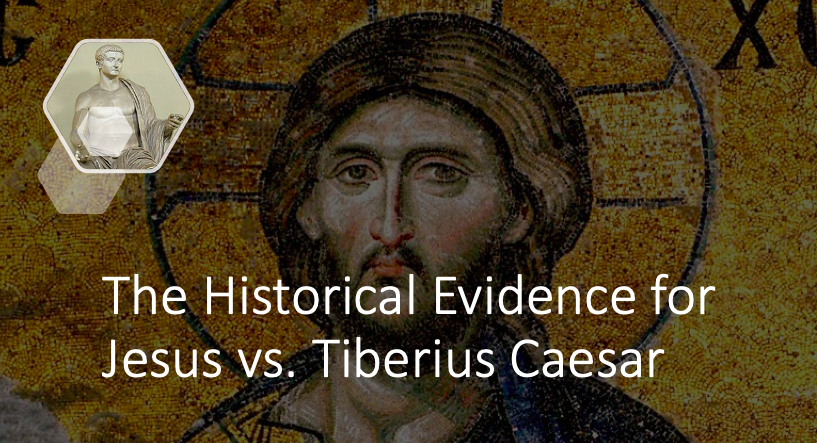 The Historical Evidence for Jesus vs. Tiberius Caesar

“How does the historical evidence for Jesus compare with other prominent figures of his day?”

This is one of the most common questions I get from believers and skeptics alike. It is a fair question. One of the best responses I have found is to compare the sources for Jesus with the sources for Tiberius Caesar, the Roman emperor from AD 14-37.

As the Roman emperor, Tiberius would have been the most powerful man alive during the life and ministry of Jesus. While some coins have been found from the time of his reign, the primary way we know about Tiberius is through written accounts, some of which appear long after his death.

The Historical Evidence for Tiberius

In Roman Society and Roman Law in the New Testament, A.N. Sherwin White summarizes the historical evidence for Tiberius

“The story of [his] reign is known from four sources, the Annals of Tacitus and the biography of Suetonius, written some eighty or ninety years later, the brief contemporary record of Velleius Paterculus, and the third-century of Cassius Dio. These disagree amongst themselves in the wildest possible fashion, both in major matters of political action or motive and in specific details of minor events…But this does not prevent the belief that the material of Tacitus can be used to write a history of Tiberius” (p. 187-188).

While there are a few other sources not mentioned by White (including Biblical sources), most scholars believe we have sufficient documentation of his life. And this is exactly what we would expect for a person of his influence and stature. Yet how does this compare to the sources for Jesus?

Remember, unlike Tiberius, Jesus had no political position, military power, or governmental authority. He was an itinerant preacher who was largely rejected by his own people. His public ministry was 2-3 years long and he only traveled within Judea. Any historical comparison of Tiberius and Jesus must take into account the length and nature of their ministries.

The Historical Evidence for Jesus

In comparison with Tiberius, what historical evidence do we have for Jesus?

Simply put, we have four historical biographies (Gospels) written in the first century when there would still would have been eyewitnesses around to confirm or reject the claims. We also have the letters of Paul, seven that are accepted by critical scholars, which date from 20-30 years after Jesus’ death. There are also short creeds embedded within Paul’s letters, such as 1 Corinthians 15:3-5, which likely dates within 5 years of Jesus’ death. And we also have the other NT books, early church fathers, and secular sources such as Mara Bar-Serapion, Josephus, Tacitus, Suetonius, and so on.

Given the breadth of evidence for Jesus, Justin Bass offers the following perspective in his recent book The Bedrock of Christianity:

“Tiberius was the most powerful man in the world of his day. Jesus was one of the poorest, belonging to the peasant class as a Jewish carpenter. He even died the most shameful death, a slave’s death, on a cross during Tiberius’ reign. Yet we have far more reliable written sources and closer to the time of Jesus’ actual life and death than this Caesar of Rome."[1]

Considering what might be expected (given the nature of their lives and positions), the historical evidence for Jesus is remarkable when compared to Tiberius Caesar.

For more evidence regarding the historical Jesus, check out the updated Evidence that Demands a Verdict (co-written with Josh McDowell).