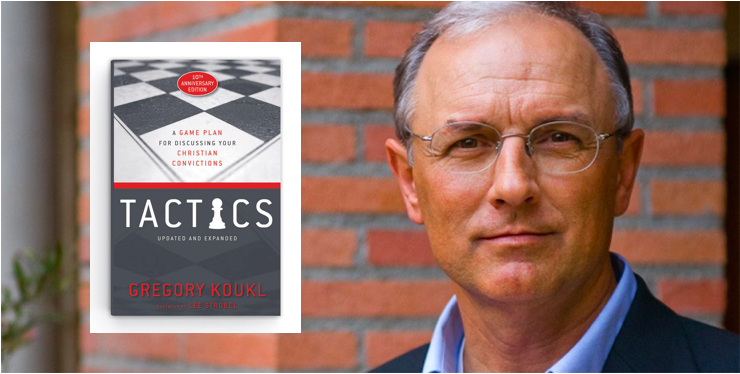 Greg Koukl has written one of the most important apologetics and evangelism books over the past decade. As I wrote in my endorsement, "Tactics will revolutionize your conversations with non-Christians.” Tactics is the primary book I am using to train a group of high school students for an upcoming mission trip to Berkeley.

This is why I am so thrilled that Koukl has released a 10th anniversary updated edition that has roughly 40% new material. If you own the original version, the update is well worth the investment. If you have not read it yet, now is the time. Check out my interview with Greg, and then consider getting a copy of his excellent book.

SEAN MCDOWELL: Why did you first write Tactics?

GREG KOUKL: Christians are generally uncomfortable with initiating conversations about Christ. Most of them would like to, of course, but in our current hostile environment they’re understandably nervous about the risk of getting into a fight, or they may feel their knowledge in apologetics is just not up to the task. Others may have gained plenty of information from blogs, books, classes, or conferences, yet still don’t know how to get their knowledge into play in a way that looks more like diplomacy then D-Day. Tactics solves both problems, providing the missing bridge from the content to the conversation while at the same time providing a tremendous amount of safety for the Christian, allowing him to have relaxed, friendly, yet effective chats in otherwise risky situations.

KOUKL: There is simply no other book like Tactics that provides a step-by-step plan to enable any Christian—brand new convert or experienced believer—to initiate conversations in a comfortable way with a tremendous margin of safety. Tactics also has a proven track record for getting amazing results (“This book changed my life” is the most common response I hear from readers). The second half of the book—“Finding the Flaw”—is basically a primer on clear thinking, allowing Christians to identify fallacies embedded in many of the most common challenges to Christianity, helping them quickly see through those bad arguments. With these insights in hand, the believer can use the game plan in the first half of the book to graciously and effectively guide the nonbeliever towards the truth.

MCDOWELL: How is the revised and expanded 2nd edition of Tactics different from the original?

KOUKL: With this rewrite, I started at the beginning of Tactics and carefully reviewed every single line of text, reworking the material in a fresh, new way (one reviewer said the 2nd edition reads like a completely new book). I also expanded many sections based on the experience I’ve gained over the last 10 years teaching the tactics to thousands of people and putting my methods to work engaging skeptics on the air and at university campuses around the world. I’ve also nearly doubled the amount of tactics in the book providing new, easy-to-use maneuvers that I’ve found to be incredibly effective to give me insight during conversations, to help me challenge bad thinking, and to put me in a position to show that Christianity is the best explanation for the way the world is.

MCDOWELL: Can you give me an example of one new tactic and how to apply at?

KOUKL: The “What a Friend We Have in Jesus” tactic trades on the high regard most people naturally have for Jesus, which is why they quote him so often, enlisting him as an ally whenever it suits their purpose even when they don’t care what the Bible says on other issues. It’s a smart move, and you can make use of it, too. For example, when someone presses you on the “narrowness” of Christianity, shrug your shoulders and say, “Well, I understand how you feel, but this was Jesus’ view, not mine, and he repeated it often. Do you think Jesus was mistaken?” When they ask if you approve of same-sex marriage, tell them you have the same view of marriage Jesus had, one He made clear in Matthew 19. In sum, Jesus’ view on marriage was one man, with one woman, becoming one flesh, for one lifetime. So, on the definition of marriage, you stand with Jesus.

Take advantage of any opportunity you have to make a challenger contend with Jesus instead of contending with you. Get Jesus on your side and let him do the arguing for you. When someone disagrees with you, then, they’ll be disagreeing with Christ.

MCDOWELL: How can people best make use of the updated version of Tactics?

KOUKL: Even seasoned readers of Tactics will find a host of the new insights, maneuvers, and strategies in the second edition. New readers should start with the basic game plan in the first section of the book. It will help them get started quickly, allowing them to ease into the shallow end of the pool with virtually no risk. Those who are more experienced with Tactics should look closely at the six new chapters while not neglecting the earlier material, since so much of that has been reworked, updated, and improved. Here is my most important piece of parting the advice, though. Take whatever you learn and put it into play as soon as possible. I promise you, it’s easier than you think and it’s really effective. Always remember, if you don’t do it, it don’t work!

Get a copy of the 10th anniversary version of Tactics here and help spread the word on this important book.