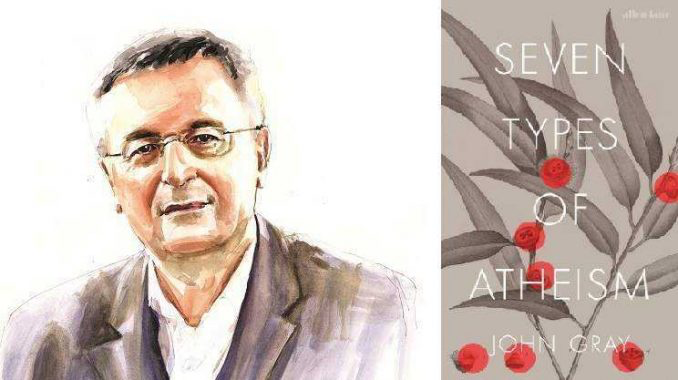 If you are interested in the history of ideas or contemporary debates regarding the existence of God, you will thoroughly enjoy John Gray’s new book Seven Types of Atheism. For whatever reason, I expected him to discuss contemporary atheism and possibly even focus on different attitudes and strategies within the “New Atheism.”

Yet to my pleasant surprise, Gray offers a much broader and deeper analysis of atheist thought. This is largely due to his definition of atheism, which he explains as the belief system with “no use for the idea of a divine mind that has fashioned the world” (p. 2). Atheism thus includes religions from ancient Greece, Rome, India, China and is not limited to modern materialistic views of the universe. On Gray's view, an atheist is one who lacks belief in a Creator.

My point here is not to debate his definition of atheism, but to highlight a few significant takeaways from the book. His critique of modern atheism is especially intriguing because he is not a religious believer. Gray describes himself as being drawn to “atheisms that are happy to live in a godless world or an unnamable God” (p. 7).

Atheism and Its Debt to Christianity

Gray describes how secular atheism is deeply indebted to Christianity in terms of its embrace of progress. Christianity introduced the world to the idea that history has a goal, a telos. Prior to Christianity, a cyclical view of history was taken for granted. Thinkers such as Karl Marx, Bertrand Russell, John Stuart Mill, Nietzsche, and Ayn Rand believed human beings needed redemption and that history was headed somewhere. This is not an idea inherent to atheism. Gray notes,

“When in eighteenth-century Europe religion began to be replaced by secular creeds, the Christian myth of history as a redemptive drama was not abandoned but renewed in another guise. A story of redemption through divine providence was replaced by one of progress through the collective efforts of humanity. Nothing like this could have developed from polytheistic religions, which take for granted that human beings will always have disparate goals and values” (p. 25).

Gray also notes that atheist rebellions against Christianity borrow the idea of right and wrong from the Christian worldview. He argues quite extensively (and correctly) that science is incapable of offering an objective moral standard, despite protestations from Sam Harris. Gray observes,

“If everything human beings do is natural, how can religion be singled out as being contrary to nature? Prayer is no less natural than sex, virtue as much as vice. If everything humans do is ordained by nature, they are following nature when they obey morality and convention…Yet if everything that is natural is good, there can be no evil” (p. 101).

And then two pages later Gray makes this piercing observation, “For atheists who truly leave monotheism behind, there is no problem of evil.”

With this observation, Gray undermines the secular critique of religion as being repressive, dangerous, and intolerant since Secularism offers no basis for right and wrong. As with their belief in progress, secular atheists borrow their moral standard from the Judeo-Christian worldview without acknowledging their debt.

“Racism and anti-Semitism are not incidental defects in Enlightenment thinking. They flow from some of the Enlightenment’s central beliefs. For Voltaire, Kant, and Hume, European civilization was not only the highest there had ever been. It was the model for civilization that would replace all others” (p. 62).

Gray makes many other valuable observations beyond the scope of this review. For instance, he describes an atheist church in the 1800s that incorporated sacraments, pilgrimages, and special clothing. Despite recent press, atheist churches are nothing new. He also illuminates the tension between transhumanism (which claims that humans are a spark of consciousness) and scientific materialism (which is based on the idea that humans are purely physical). He insightfully describes transhumanism as a “contemporary version of a modern project of human self-deification” (p. 68).

As far as critique, I wish Gray had engaged Christian thinkers who have made significant contributions over the past few decades to historical Jesus studies. He completely ignores the transformative work of scholars such as N.T. Wright, Richard Bauckham, and Gary Habermas. Instead, Gray seems content citing a range of possible scenarios in his dismissal of the historical evidence for Christianity.

For instance, he says, “Jesus may have married, divorced and remarried, spent some years preaching his gospel and died a natural death” (p. 18). This is certainly possible, but there is no reason to believe this explanation is the most reasonable. The positive evidence for the historical Jesus deserves (at least) a footnote in a book tracing the history of atheist thought amidst its interactions with critics.

But all things considered, this is a minor complaint. Seven Types of Atheism is an insightful, eye-opening, and enjoyable read for those interested in the history of ideas.