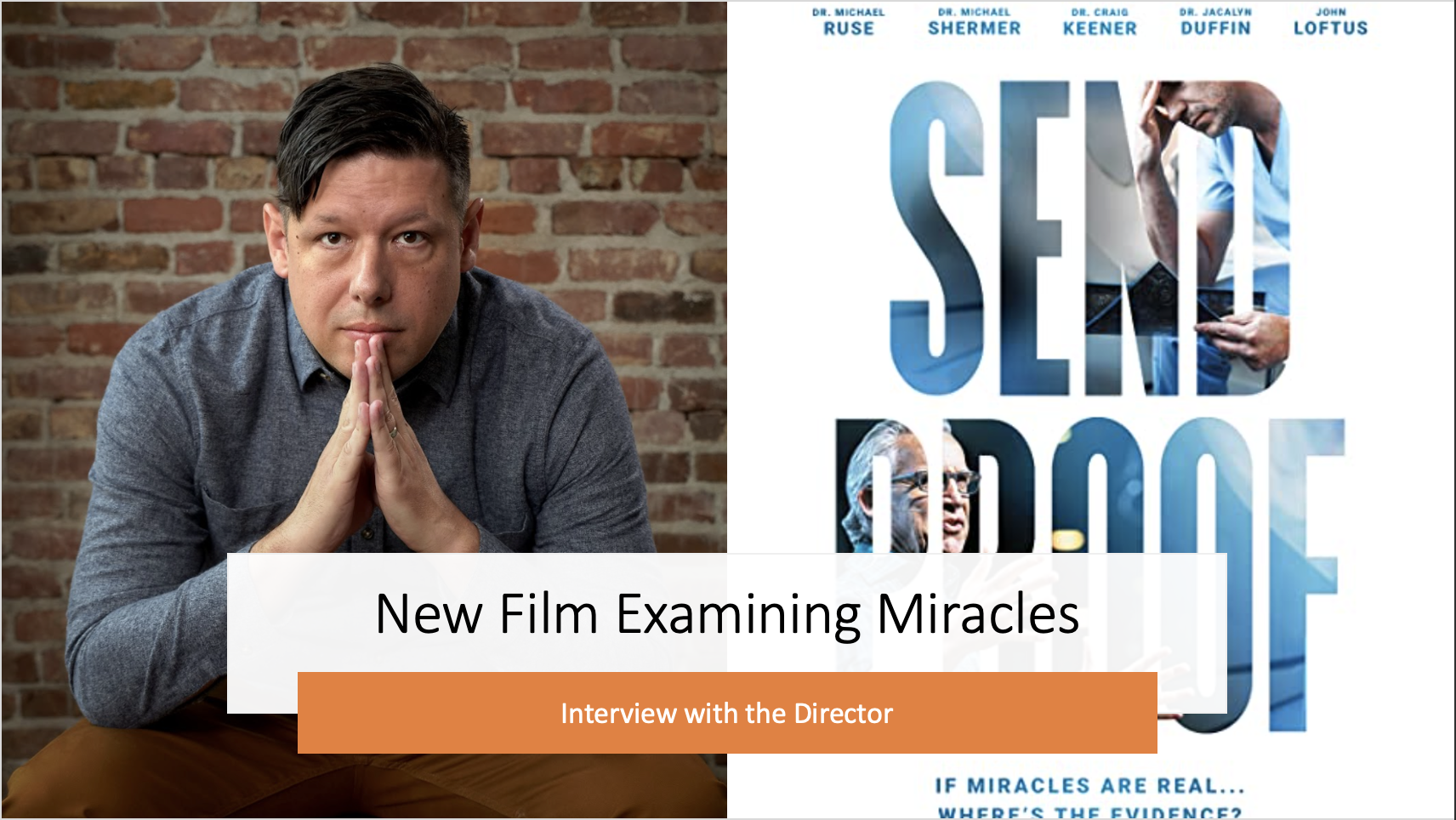 Send Proof is a new film examining the evidence for and against miracles. It features Christian thinkers such as William Lane Craig and Craig Keener and atheists such as Michael Shermer and John Loftus. It was created by former Biola Apologetics student Elijah Stephens, who spent roughly six years researching and producing it. Since the film is just releasing, I caught up with Elijah. Check out this interview and consider watching the film at SendProof.com.

SEAN MCDOWELL: What motivated you to produce a timely, expensive documentary on miracles?

ELIJAH STEPHENS: The short version of the story is that I have wrestled with miracle claims since I was young (I tell the “long” story in the film). I have seen family members conned by faith healers promising healing if they give money. I have also experienced people testifying that they were healed after prayer in Jesus’ name. My former senior pastor, who was charismatic, ending up leaving the faith and denying both the existence of God and the reality of miracles. As you can imagine, that made me want to investigate miracle claims for myself.

MCDOWELL: What makes this documentary unique?

STEPHENS: I think it is the first documentary to present claims of healing from prayer that have been published in peer reviewed medical journals. I believe that one of the best ways to make a case for the supernatural worldview is to provide up-to-date case studies. Thus, the film is a called Send Proof, because it is a call to Christians who believe that they have been healed by prayer in Jesus’ name to contact our research team and “Send Proof.”

This film also aims at social change in the Pentecostal, Charismatic and 3rd wave movements. I want to see people move from not caring about evidence for healing claims to willfully providing it for research purposes. My desire is for this film to help spread the word on the need to document miracles so we can see 100 more case studies published in the next 10-20 years.

MCDOWELL: How do we determine if an event really is a miracle as opposed to coincidence?

STEPHENS: A coincidence is when two events happen in close proximity together, and they don’t have an apparent causal connection. For example, it would be a coincidence if two twins are separated at birth, and end up meeting each other for the first time in their sixties while both are vacationing in Paris, France.

A miracle, on the other hand, is when God causes the normal course of events to be different than they would have been otherwise. For example, when Jesus prayed for water, it miraculously turned to wine.

However, defining a miracle and a coincidence is the easy part; the hard part is examining an event and determining which it is. The reason for this, is that there are many natural phenomena that can and have been mistaken for miracles. To name a few examples, doctors can misdiagnose a case as incurable, and then when the person experiences healing, of an entirely different, yet curable disease, that person can be led to believe that he or she experienced a miracle. Also, there are con artists who fake miracles for fame and money. Sometimes people who experience trauma go blind, and will regain their sight later in life. If that happens close to a prayer event, one might be led to believe it was a miracle.

The best thing one can do when one believes a miracle has occurred is to list all the possible phenomena that could account for the event. Then begin by eliminating the most obviously unlikely explanations. For example, I have a blind lady who was diagnosed with macular degeneration after becoming blind, she later received her sight back after prayer in the film. We were able to eliminate psychosomatic illness as a cause, because her blindness was not a result of trauma and her records showed biological evidence of a disease. After eliminating options, one must make an inference to the best explanation as to whether or not a miracle occurred.

MCDOWELL: What is your most surprising finding?

STEPHENS: After having studied the conversation on miracles for several years, I felt what I was reading and hearing about began to get a little repetitive…until I talked with Dr. Jacalyn Duffin. She was an atheist but began researching miracles after she was called upon to examine a case for the catholic church, which she concluded was a miracle.

She then went on to research 1400 cases at the Vatican and was surprised to find that they used the most up to date science for the time periods of each case. During a conversation, she mentioned something that revealed a bias in myself that I think is very common in western Christians. She said that the Vatican had lot of cases of tuberculosis healings prior to a treatment being discovered, and after that she saw little to no reports. She found that after a cure to a disease is discovered, often people typically will not accept something as a miracle, even if no treatment is involved.

For example, imagine a part of Africa today, that does not have TB treatments, and a person contacts it, gets prayer, and is healed. Could that be a miracle? Most Westerners would dismiss the case before looking into the details, because we are biased that if treatment exist, then a natural cause is most likely the best explication, even in cases without using that treatment. My talk with her challenged me to look deeper before dismissing such claims.

MCDOWELL: You teach apologetics in the Charismatic/Pentecostal tradition, a tradition that has not traditionally embraced apologetics. What tips do you have for connecting them to the life of the mind? Is your film uniquely poised to address this issue?

STEPHENS: The people in those movements generally are a very “experience” focused group who deeply desire to seek the presence and power of God, more than they desire objective knowledge about Him. For many, apologetics is seen as debating people. At best, apologetics is useless when one has the Spirit of God. While that is not true about apologetics, I think it helps to meet people where they are at by understanding how they think, and then building bridges from there.

The number one mistake I see most evangelical apologists make in reaching my tribe is that they try to get Charismatic to become less experiential oriented, and more intellectually focused. This shuts them off, as many believe it’s better to experience the Holy Spirit, than to be educated, but “dry.” Rather, to win this tribe to the life of the mind, an apologist must help them make a connection to how the intellectual life can amplify their walk with the Spirit. One of the first things I do to bridge the gap is to tell miracle stories that I have seen, and then talk about the evidence for healing miracles, or NDEs. This helps show that I care about the role of experience in the life of the believer, and learning about evidence can build one’s confidence in what one believes.

Secondly, I point out that the most Spirit-led people in scripture where some of the most educated. Moses and Daniel were trained in the king’s courts. Jesus and Paul were both rabbis, meaning that they were educated from a young age till age 30, which is about how long it takes someone who stays in school to get a Ph.D. today. Paul’s education did not hinder his walk with the Spirit, but amplified his ability to discern what Spirit was saying to the church and articulate it persuasively.

It’s also helpful to point people to examples of “revivalists” who are widely known for the Holy Spirit moving in their ministries. Jonathan Edwards is highly celebrated in our movement because his influence on the first Great Awakening. He frequently had people falling under the power of the Spirit in his services (called the jerks), with loud weeping, laughter, and repentance. His wife reported having a mystical experience of God that lasted nearly two weeks. At the same time, he is America’s most well-known and respected theologian, and was the 3rd president of Princeton. Walking them through “Distinguishing Marks of a Work of the Spirit of God” helps them see how Edwards used scripture and his intellect in developing discernment between what was the Spirit vs. human or the demonic during his meetings.

Once trust is built, it’s easier to move into classical arguments for God’s existence and the resurrection. By respecting the desire to experience God in the charismatic movement, the apologist can help those who are anti-intellectual move toward cultivating the life of the mind.

Check out the film Send Proof at SendProof.com.