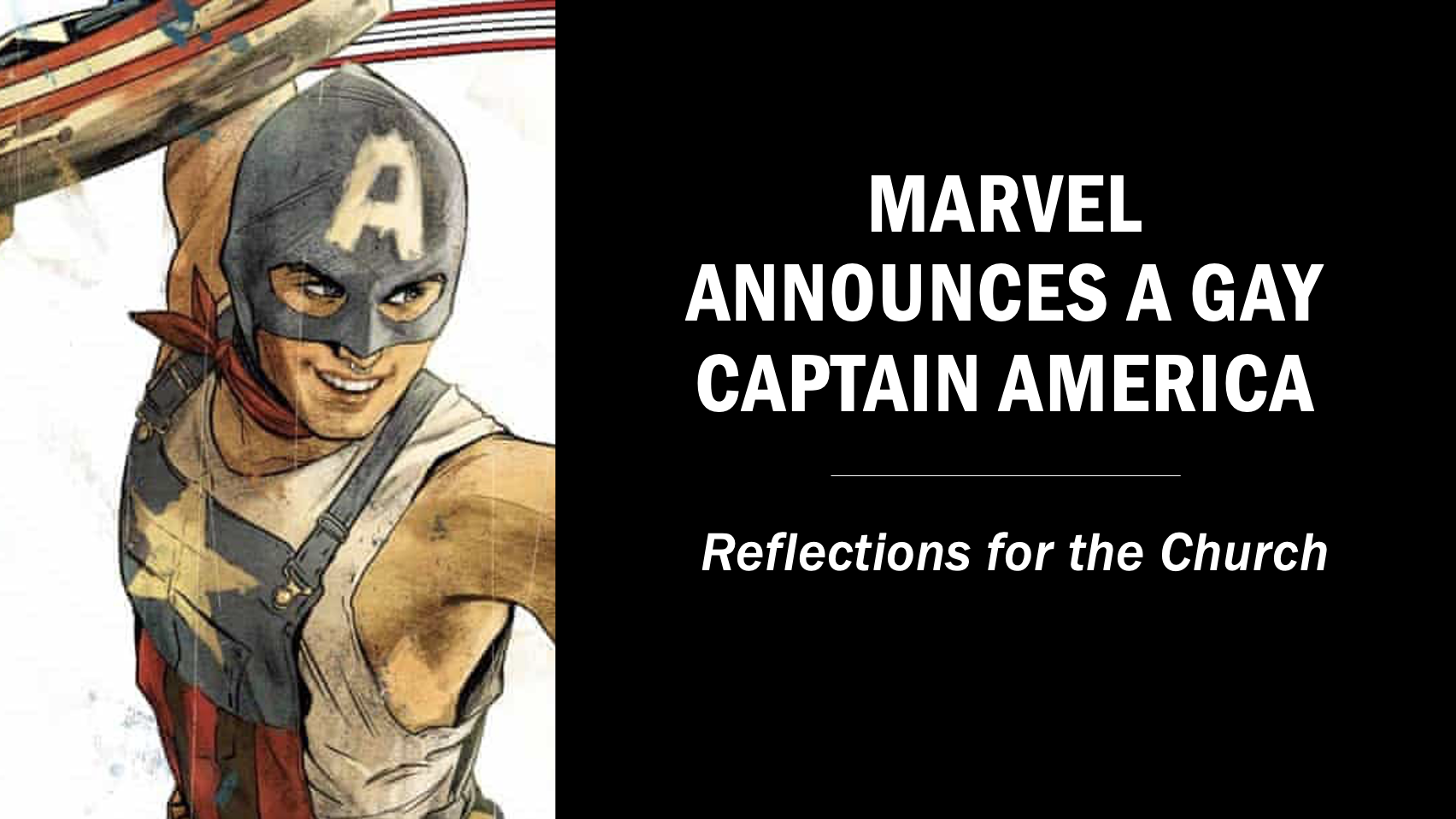 Marvel Introduces A Gay Captain America: 3 Reflections for the Church

Marvel recently announced the release of a new comic series: The United States of Captain America, which will feature the first LGBTQ individual to pick up the mantle of Captain America. It releases June 2, just in time for Pride Month.

Here is the basic storyline: “Marvel Comics is celebrating the 80th anniversary of the US hero with the launch of a new series…in which the incumbent Steve Rogers will team up with former Captain Americas when his shield goes missing. The heroes will take a road trip across the US to find the shield and will meet people from ‘all walks of life’ who have taken on the mantle of Captain America to defend their communities. Aaron Fischer, a gay teenager, will be the first, in the new limited series, released in June.”

Fischer is a fearless teen who defends other homeless and runaway teens. According to Josh Trujillo, the series writer, “Aaron is inspired by heroes of the queer community: activists, leaders, and everyday folks pushing for a better life. He stands for the oppressed, and the forgotten. I hope his debut story resonates with readers and helps inspire the next generation of heroes.”

Much could be said about this story, but here’s three quick reflections.

First, this should come as no surprise. Along with the cultural shift regarding LGBTQ relationships and identities over the past few years, Marvel has been introducing LGBTQ characters and storylines for some time. In 2012, Marvel featured the same-sex wedding of Northstar and his longtime partner. And in 2015, Iceman, one of the iconic X-Men characters, came out as gay.

Second, contributors to this series genuinely want to help LGBTQ teens. Artist Jan Bazaldua is “happy” about the opportunity of contributing to this series and being able to “help those who are almost invisible to society.” Although I have a different theological perspective than Jan, I share the concern for this vulnerable community. Rather than responding to this story defensively (as all humans do naturally), it would be wise to begin by finding common ground with others on the desire to help hurting LGBTQ teens. Are there ways to work together across ideological lines? What can we learn about the vulnerability of LGBTQ teens from people like Jan? What have others learned about the best way to help homeless LGBTQ teens? Asking questions like these provide more help for LGBTQ teens, foster common ground with others, and develops mutual respect.

Third, the oppressors in this story reveal a deep cultural shift. Often, heroes and villains in modern books and movies reflect society’s interpretation of who today’s liberators and oppressors are. In the first Captain America comic (1941), Steve Rogers joins the army during WWII. The Nazis were oppressing the world, and Captain America needed to stand up in defense of the oppressed. In this new storyline, it is LGBTQ teens who need someone to stand up for them against oppression. This raises an interesting question: Who is the oppressor?

While the details of the storyline have not been released, my suspicion is that it might adopt the cultural narrative as described in Critical Theory. According to CT, people who believe in a binary approach to sex and gender, and that marriage is a gendered institution, are oppressing LGBTQ teens. In other words, if you believe that humans exist naturally as male and female, and that sex is meant for the marital union of one man and one woman, then you are an oppressor.

I have been told by both progressive Christians and atheists that my conservative theology causes suffering in the lives of LGBTQ people. Since I embrace the historic Christian view of sex, gender, and marriage, they claim that I contribute to the loneliness, depression, and homelessness of LGBTQ kids.

My point here is not to challenge this narrative (which has been done by others), but to note how concepts of justice and oppression have radically changed since the origin of Captain America. Nazis were the oppressors when Captain America began. Now it is those who are not on board with the modern gender and sexual revolution.

Quite obviously, the world has and continues to change radically. The introduction of a gay Captain America reveals how far we have come.

For a biblical view of sex, love, and marriage, check out my latest book Chasing Love.