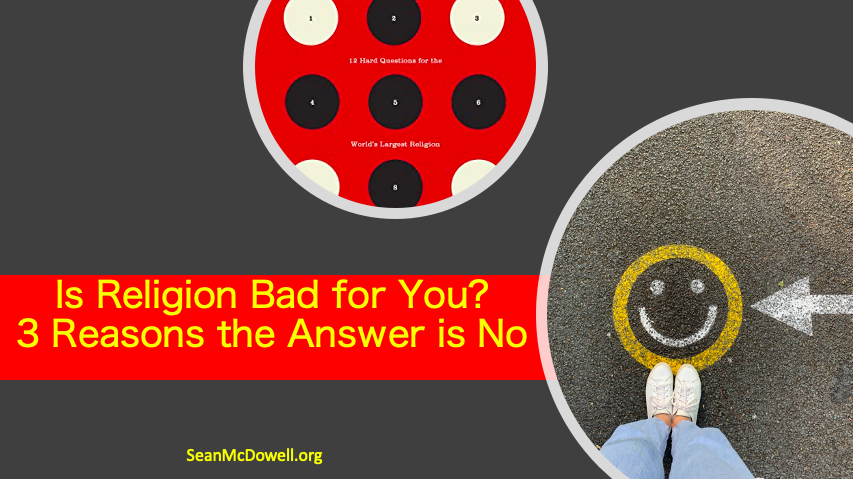 Is Religion Bad for You? 3 Reasons the Answer is No.

One of the most common criticisms of religion today is that it is bad for people. It’s a fair issue to raise, so let’s see if it’s true.

Interestingly, there is solid data to conclude that the opposite is actually true: Religion can be good for people. After reviewing the relevant research, Rebecca McLaughlin concludes,

One reason religion may have psychological benefits is that it gives people a greater sense of purpose to their lives. Believing your life has meaning and significance, even amidst suffering, can bring a deep sense of contentment in daily life. A second reason is the value of community and good relationships. Happy people tend to have good relationships with family, friends, and the community, which are values most religions embrace.

Some Religions Are Harmful

With this said, there is no doubt that some religious beliefs can be harmful. And sadly, many people have been hurt by those in the church. But according to McLaughlin, in her excellent book Confronting Christianity, “To say that religion is bad for you is like saying, ‘drugs are bad for you,’ without distinguishing cocaine from life-saving medication” (p. 21). Exactly!

So, what are the reasons to believe that Christianity may have good psychological benefits for people? In her book, McLaughlin lists seven counterintuitive biblical principles, in line with the findings of modern psychology, that contribute to positive effects on health and happiness. Let’s consider three:

First, it is better to give than to receive. Although many secular people are generous with their time and resources, studies consistently show that religious believers give more liberally to charity. A growing body of research shows that the biblical principle, “it is more blessed to give than to receive,” (Acts 20:35) is good for mental health.

Second, money will not make you happy. Many young people today consider being very well off financially as essential for a good life. In contrast, the Bible consistently warns that the love of money is “a root of all kinds of evil” (1 Tim. 6:10). Although the research is complex, McLaughlin concludes, “The biblical warnings against the love of money turn out to be more true than we realized: invest your life in money over relationships, and the returns will not satisfy” (p. 24).

Third, Forgiveness is good for you. We live in an age of cancel culture. People look to humiliate others and “punish” them for holding the “wrong” beliefs. Forgiveness is often lacking. And yet Jesus commanded his followers to love their enemies and to forgive them without limit. Even when he was being nailed to the cross, Jesus said, “Father, forgive them, for they know not what they do” (Luke 23:34). Being willing to forgive other people, even when they do not reciprocate, has been linked to multiple positive mental and physical health outcomes.

These findings don’t prove that Christianity is true. And as McLaughlin notes, Christianity does not have a monopoly on these principles. But they are a good starting place to respond to the claim that religion is bad for you.

For more evidence regarding the historical Jesus, check out the updated Evidence that Demands a Verdict (co-written with Josh McDowell).