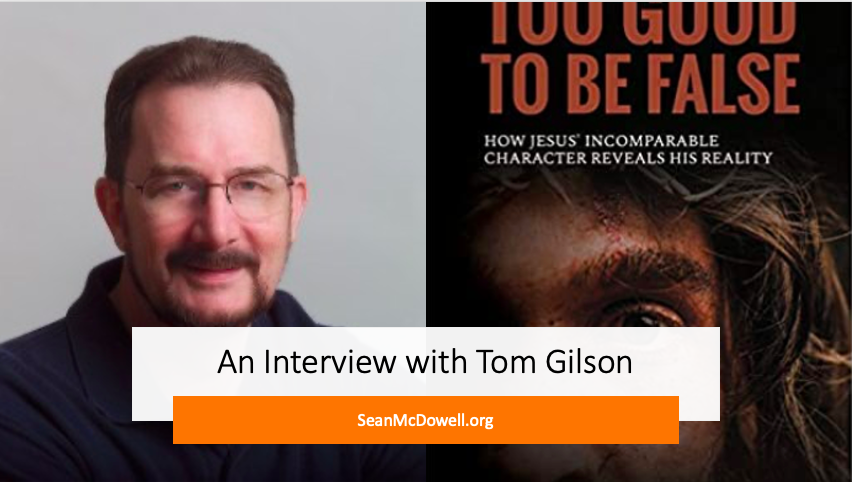 Is Jesus Too Good to Be False? Interview with Author Tom Gilson.

My friend Tom Gilson has a fascinating new book on the historical Jesus. In Too Good to Be False: How Jesus' Incomparable Character Reveals His Reality, he brings some fresh insights to the character and ministry of Jesus. I would recommend it for Christians who want to go deeper in their understanding of Jesus, and for skeptics open to considering his radical claims. Start by checking out this brief interview and consider getting a copy of his excellent book.

SEAN MCDOWELL: There are thousands of books on Jesus. Yet, you've written a new book that offers a creative, fresh look at his life and identity. What's it about?

TOM GILSON: Everyone studies what Jesus said and did, and for good reason, obviously. In this book, though, I focused on what he didn’t do. The world has seen lots of great leaders, lots of religious founders. My question was, is Jesus one of the crowd? Does he do what they do, or does he stand out?

The answer is clear: He stands out. He didn’t preach like the prophets preached. He didn’t lead the way other great leaders lead. He loved in ways unlike anyone known to humankind. On one dimension after another, he’s unique, he’s consistent, he’s great, and he keeps on surprising you with it.

MCDOWELL: Can you share one unique finding from your book that helps capture its uniqueness?

GILSON: Sure. You know how much Jesus emphasized faith, right? You’d think as a great leader he’d be a model of it, wouldn’t you? Paul certainly was: He mentioned his own faith about 20 times, by my count.

But Jesus? Nowhere in the Bible does it say that he had faith. Not even once.

Have you ever heard anyone talk about that? Not I. It’s stunning, really.

But what do we make of it? He certainly wasn’t lacking any trust in the Father. Still, this silence on Jesus and faith demands explanation. It really needs more analysis than I have space for here, but here’s the simplest answer: He was God. And God doesn’t have “faith” in God. Once you see it, you realize it’s a subtle yet unmistakable sign of his deity on display in all four gospels.

MCDOWELL: You seem to be arguing that Jesus is even better than his followers realized, but also that he's too good to be false. What do you mean?

GILSON: The answer starts with taking the skeptics seriously when they get all impatient, telling us, “Come on, folks. It’s a story.” Well, it is, of course. But skeptics think this story was so simple and ordinary, it would have been easy for a “community of faith,” spread all around the Mediterranean and into Asia Minor, to pass it around orally from place to place, each group embellishing it as it went along, until their various versions of it finally landed in what we call the four gospels.

I could almost imagine this legend-building process working for the setting and the plot of the story. Maybe some of the dialogue, too. But the character of Jesus? No way. The problem is, this process is perfectly designed to scramble a story.

Bart Ehrman imagines a “Telephone Game” by which stories would “change” as they spread around the various countries and cultures. I say “change” is much too soft a word for it. You’d have to expect some real corruption showing up in it as it traveled along its different routes, until finally it landed four times in four separate (though interdependent) documents, the four gospels.

Skeptics suppose that minor differences — the number of angels at the tomb, for example — demonstrate that corruption. They completely overlook the character of Jesus. All four accounts show him standing out as completely consistent, completely unexpected, completely unique, and astonishingly good.

I devote several chapters to showing how unbelievably hard it would be to invent a character like his. No literary genius has come close. But this story-scrambler did? I don’t think so. He’s too good to be false.

MCDOWELL: What is the story behind writing this book? And who did you write it for?

GILSON: I write a lot on culture and faith, including some of the toughest, most culturally divisive issues. My wife, Sara, asked me some time ago, “Do you want that to be your whole legacy?” It’s important, even crucial stuff, but I still wouldn’t want it distracting from the main thing, which is God’s revealing himself in Jesus.

Meanwhile I was studying Jesus’ character, discovering incredible new insights I’d never seen anyone write — not in many generations, as I came to find out. Honestly, it felt like I was sitting on a secret that had to be shared with the world.

But I wanted it to be accessible, so I wrote it for every reader: pastors, teachers, and of course lay people. There’s a study guide in the back for individuals or for group discussion. It’s very, very readable. Skeptics should be interested, too, as there are questions in it they really haven’t faced before.

I’m gratified by three distinguished scholars’ comments. Craig Evans noted that even though it’s written for a general audience, the “professionals” could get a lot out of it, too. J.P. Moreland said it led him to “love, respect, and worship Jesus with renewed vigor and insight.” And Gary Habermas? He called it “a fun read.” I liked that, too.