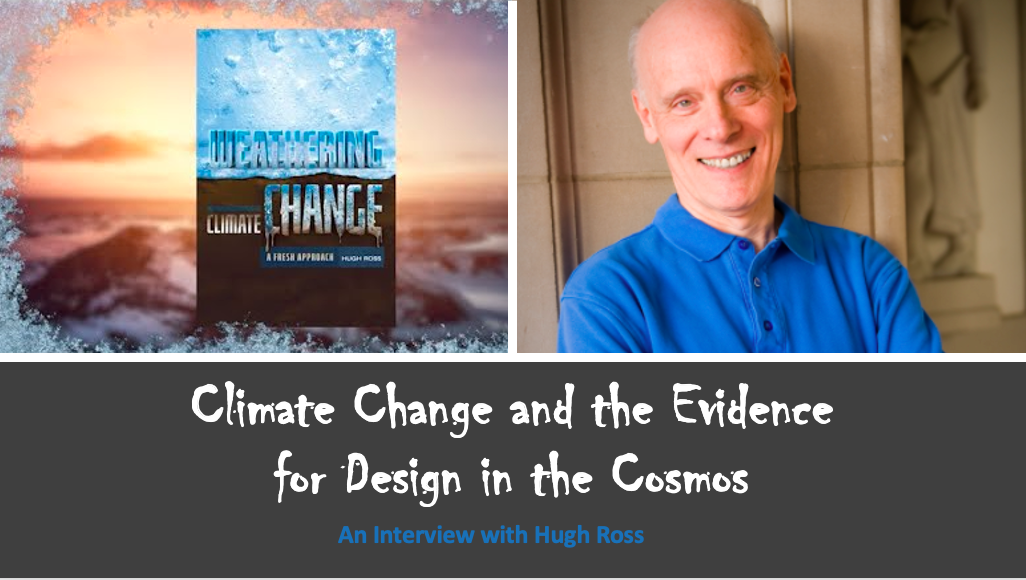 How Do We Weather Climate Change? Interview with Hugh Ross

With the release of his latest book––Weathering Climate Change––Dr. Hugh Ross has jumped into the climate change debate. Those of you familiar with his work will not be surprised that his approach is both research-based and geared towards showing the uniqueness of a thoughtful Christian response. Check out this brief interview, get a copy of his excellent book, and then consider joining us for an upcoming live conversation on this topic (Sunday night, June 14, 7pm PST).

SEAN MCDOWELL: You have a new book coming out on climate change. Given the nature of your ministry at Reasons to Believe, why tackle this topic?

ROSS: Reasons to Believe reports on the increasing scientific evidence for fine-tuning of the natural realm, divine design for the specific benefit of humanity. The evidence indicates that God planned and prepared for both the existence of billions of people and the redemption of all who would put their trust in Him. Understanding what makes possible the phenomenal stability of Earth’s climate throughout the past 9,500 years yields (and continues to yield) a new wealth of this fine-tuning evidence. It has been thrilling for me to uncover this evidence, and I believe it can be life-changing for many.

MCDOWELL: If you had to sum up your level of concern for climate change, what would it be and why?

ROSS: I am especially concerned about how the climate change debate has needlessly contributed to polarization and political rancor. Sadly, research data as well as biblical principles have been ignored, misconstrued, and/or misapplied. However, I am hopeful that when readers recognize that the past 9,500 years of extreme climate stability has been a miraculous gift from God, they will gain hope and confidence that God-given solutions to impending climate instability do exist and can be developed and implemented.

MCDOWELL: What are one or two of the biggest scientific misconceptions concerning climate change?

ROSS: One major misconception is that we lack reliable data about climate change and the primary causes of climate change. This may have been the case a few years ago, but it’s no longer the case. One of my motivations for writing the book is to show readers recent data that points to multiple causes of climate change. A second problematic misconception—one we’ve heard over and over again—is that we must choose between sustaining climate stability and maintaining anything like the current standard of living. This book expresses my desire to show readers that there are multiple ways we can work together to restore and sustain climate stability while at the same time boosting the world economy and the economic wellbeing of all nations, and especially of people most likely to suffer from climate instability.

MCDOWELL: Are there other changes in Earth’s environment about which we should be concerned?

ROSS: Yes, definitely, such as increasing solar luminosity and flaring, which we can’t control, as well as pollution and forest management, which we can control. One point I emphasize throughout the book is that change is the norm for Earth’s climate. What convinces me that the past 9,500 years of extreme climate stability must be a miraculous gift from God is that over a dozen narrow and unprecedented time windows somehow, for this moment in Earth’s history, aligned to produce optimal conditions the development and flourishing of human civilization.

MCDOWELL: How does Scripture inform how Christians should think about the environment in general and climate change in particular?

ROSS: God makes clear in Genesis 1, Job 37–39, and Proverbs (among other passages) that we’re responsible for managing Earth’s resources for the benefit of all life. This mandate implies that we will not be forced to choose between what is beneficial for humans and what is beneficial for the rest of Earth’s life. However, the mandate also implies that we need to marshal all of our God-given knowledge and abilities to find and employ the environmental management strategies that will be globally beneficial. Scripture also makes clear that human beings are prone to something called “sin,” a propensity to consider “self” above others. Hence, any governmental or international attempt to impose draconian economic sacrifice is doomed to fail and, worse yet, likely to bring on a multitude of unintended catastrophic consequences.

MCDOWELL: Is the climate debate about a larger worldview conflict? If so, what is it?

ROSS: It involves many worldview conflicts: theism vs naturalism (worship of the Creator v. worship of the creation); free market v. command economics; wealth creation v. wealth redistribution; democracy v. rule by the elite. In the book, I approach these worldview conflicts by encouraging readers to seek truth and goodness and to participate in fulfilling our God-given mandate.

MCDOWELL: Is there an ultimate question you seek to answer? If so, what is it?

ROSS: I want readers to ask themselves why we’ve been granted this extraordinary period of climate stability. What are we to do with this incredible gift? Ultimately, what’s the basis for our hope and purpose? What is our destiny?