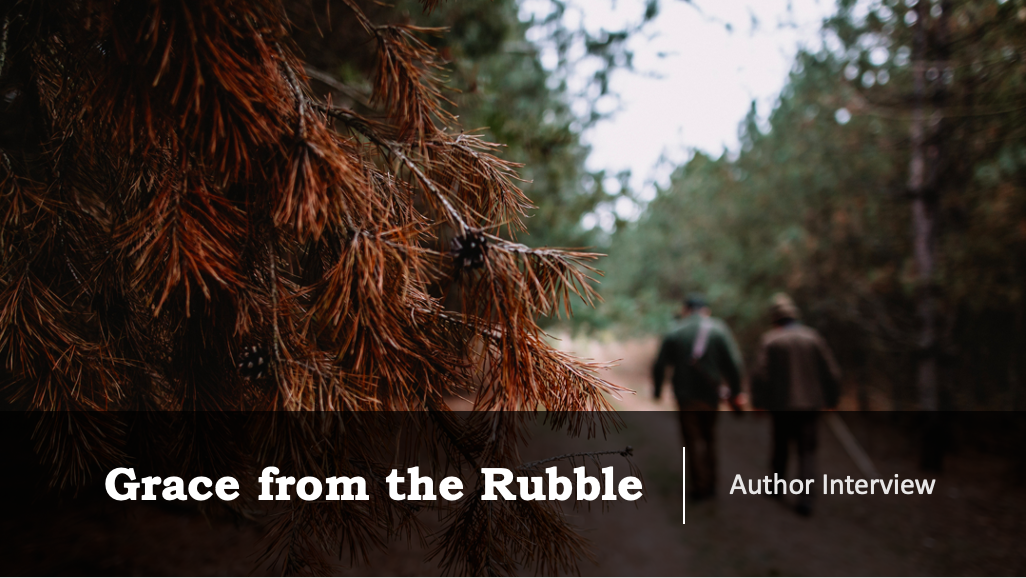 Jeanne Bishop has written a timely and moving book that chronicles the reconciliation of two fathers after the OK City bombing: Grace from the Rubble. The book is timely because this week marks 25 years since the bombing, and also because our nation is hurting through the pandemic and looking for stories of hope and healing.

Jeanne was kind enough to answer a few of my questions. Please check out this brief interview and consider getting a copy of her excellent book.

SEAN MCDOWELL: You tell an amazing story in your upcoming book Grace from the Rubble. What is the heart of the story?

JEANNE BISHOP: The heart of the story I tell in Grace From the Rubble is the astonishing reconciliation and friendship between two men who should have been enemies: Bud Welch, the father of a 23-year-old daughter, Julie, who died in the Oklahoma City bombing in `1995, and Bill McVeigh, the father of the young man who built and set off that bomb, Timothy McVeigh.. The attack killed 168 people; it was the deadliest strike on U.S. soil since Pearl Harbor and is still the nation's deadliest act of domestic terrorism. Bud was a gas station owner in OKC, and Bill an auto parts worker at a plant in Lockport, New York. After Timothy McVeigh was convicted for his crimes and sentenced to death, but before McVeigh's execution, Bud reached out to Bill McVeigh in compassion and forgiveness, to find that common ground of fathers: one, a man already grieving the of his only daughter, .and the other, a man about the grieve the death of his only son.

MCDOWELL: What was it like when Bill McVeigh and Bud Welch first met? And what is their relationship like today?

BISHOP: Both Bud and Bill were nervous about their meeting at first. Bud went to see Bill at the very house where his daughter's killer grew up, Bill was facing a family member of one of the victims of the bomb his son had set off, and was unsure of what Bud's reaction to him would be. But from the moment Bud knocked on the front door and Bill answered it, the two men found incredible common ground. Both had grown up on farms in big, Irish-Catholic families. Both went to Catholic schools all the way through high school. Both never went to college, were working men. Both had three children. They were born only months apart. If they'd grown up in the same neighborhood, they'd have been the best of friends. Now, today, they are friends, linked by the way history wove together their lives.

MCDOWELL: You have a personal story of tragedy. Can you share that story and how you sought reconciliation with your sister’s killer?

BISHOP: I come to the story I tell in Grace From the Rubble from my perspective as someone who also lost a loved one to a deliberate killing. Bud's daughter was murdered in the bombing; Bill's son was executed for his crime in 2001; and my younger sister Nancy, her husband and their unborn baby were shot to death in their home on Chicago's North Shore in 1990.. She was 25 years old and three months pregnant with what would have been their first child. The murders went unsolved for six months; no one could fathom why anyone would want to kill this happy young couple with no enemies, with no reason in the world to take their lives. When an arrest was finally made, it was shocking: their killer was a 16-year-old boy who lived a few blocks away.. He was found guilty and sentenced to life in prison without the possibility of parole. I forgave him right away but never told him, because in my mind, it wasn't for him: it was for God, for Nancy and for me. But over time, I was convicted by this stark truth: that Jesus, when he was dying on a cross, prayed for his killers. He asked God to forgive them. And so I started praying for the young man who killed my sister, and reached out to him to reconcile. It has been a journey of healing for both of us.

MCDOWELL: How has your relationship with Bud and Bill impacted you personally?

BISHOP: Knowing Bud and Bill has had a profound impact on me. They live out Jesus' words in one of the Beatitudes, that blessed are the peacemakers. The courage and love of these two fathers is a living example to me of all the good that comes when you reach out across the divide that separates you from another person, when you come together and talk, and listen and learn in compassion and empathy. They show us how you can redeem tragedy: with love.

MCDOWELL: How would you respond to people who say that this kind of evil is evidence against the existence or justice of God?

BISHOP: The kind of evil that blows up a building full of innocent people, including tiny children playing in the day care in that building, and kills 168 people, including 19 children, is not from God. It is from us, from people who, for whatever twisted reason, choose to exercise the free will that God has built into us, God's creation, in such a destructive way. God's way is creation, not destruction; love, not hatred; reconciliation, not enmity. And evil will never have the last word; God's love and justice will. As my sister lay dying in the basement of her home, near the body of her husband, who was already dead, she did this unimaginable thing: she dipped her finger in her own blood and drew the shape of a heart and the letter "u." Love you. Her killer did not have the last word. She did, and that word was love. God's love will always have the last word on our lives.

Please consider joining Sean and Jeanne for a live interview this Wednesday, April 22, 4-5 pm PST: https://www.youtube.com/watch?v=TTaP-FeUs5w. Sean will interview Jeanne about her book, and they will take live questions.