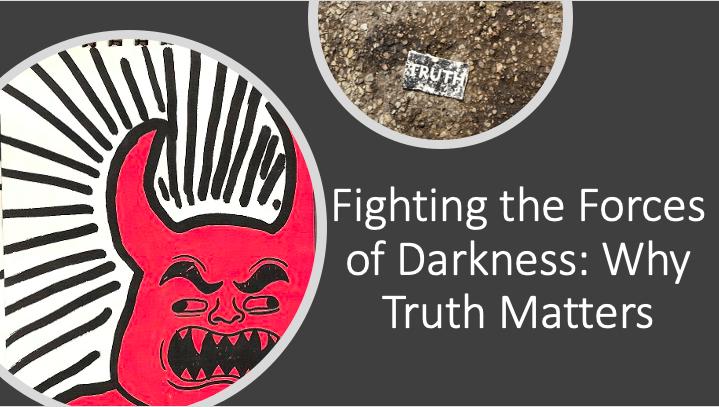 Fighting the Forces of Darkness: Why Truth Matters

Fighting the Forces of Darkness: Why Truth Really Matters

Why is truth really important? Apologists have offered a number of reasons why truth matters, but there is a BIG one we often miss–and we must recover it. It relates to how we fight the supernatural realm. Let me explain.

In his exhortation to the church at Ephesus, Paul encourages believers to have the right defense against rulers of darkness.

Paul implores Christians at Ephesus to take spiritual warfare seriously and to be properly prepared. What does that preparation entail? He lists various kinds of armor including the “shield of faith,” the “sword of the Spirit,” and the “breastplate of righteousness.”

Have you ever noticed what he listed first? Right after the passage above, Paul says, “Stand therefore, having fastened on the belt of truth” (v. 14). Paul lists righteousness, faith, the gospel, word of God, prayer, perseverance, and salvation as part of the armor of God, but the first armor he mentions is truth.

We tend to think of spiritual warfare as constituting power encounters with the demonic realm. Interestingly, though, Paul does not encourage exorcisms or the confrontation of supernatural powers. Rather, spiritual warfare involves “destroy[ing] arguments and every lofty opinion raised against the knowledge of God” (2 Cor. 10:5).

Recently I interviewed Dr. Michael Heiser about demons and the supernatural. It was fascinating and game-changing to see how many unbiblical ideas have been adopted into the church (and many that I have uncritically accepted). Here is a key point from his study, which he concludes in his book Demons, “While not spectacular, adherence to truth and committed discipleship is what constitutes spiritual warfare in the New Testament theology.”

Knowing, embracing, and living truth is at the heart of spiritual warfare. Why? Because Satan is the father of lies (John 8:44). Satan’s primary tactic is to spread misinformation to both Christians and non-Christians about the character of God. He schemes to subtly mislead people about God’s word. If Satan’s first strategy is to lie, then truth is our primary defense.

Apologists, pastors, and other thoughtful Christians must continue to defend truth. But we must not forget the most important reason: Truth is necessary to fight against the forces of evil.

If you are looking for a defense of the importance and knowability of truth, check out the updated Evidence that Demands A Verdict.