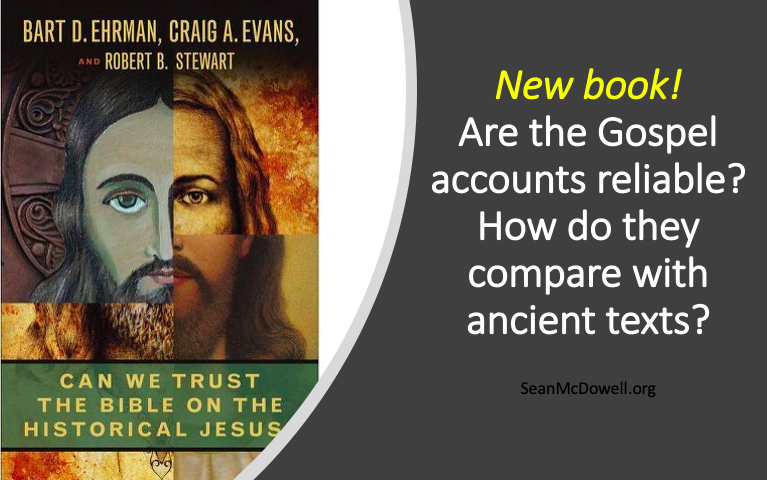 Can We Trust Scripture on the Historical Jesus?

A new book releases today on the question of the trustworthiness of the Bible as it relates to the historical Jesus: Can We Trust the Bible on the Historical Jesus? It features the debate between Craig Evans and Bart Ehrman, which took place at New Orleans Baptist Theological Seminary as part of the Greer-Heard Forum.

At the heart of the debate is whether or not the Gospels have been transmitted accurately. Craig Evans says YES, and Bart Ehrman says NO. You can pick up a copy of the book for details, but overall it is a helpful guide to understanding where much of the scholarly (and popular) divide is on the accuracy of the Gospel accounts of Jesus.

Comparing the Gospels and Ancient Writings

In his defense of the reliability of the Gospel account, Evans offers a helpful comparison of other ancient historical works with the Gospels (Tacitus, Herodotus, Thucydides, etc.):

“Against the backdrop of these classical works, the New Testament Gospels compare quite favorably. Large portions of the four Gospels are preserved in Papyrus 45, a papyrus codex that dates to the early third century, perhaps the late second century, as some contend. Late second-century Papyrus 66 preserves most of the Gospel of John. Late second-century Papyrus 75 preserves large chunks of Luke and John. A number of small fragments are candidates for a second-century…The prize for being the oldest fragment of a New Testament writing goes to Papyrus 52, which is dated by most scholars on papyri as sometime before AD 150” (p. 36).

I appreciate that Evans doesn’t overstate his case and that he says the Gospels “compare quite favorably” with classical works. There is no need to exaggerate the case for the early transmission of the Gospels. They fare quite well in comparison with other ancient writings.

Dating the Gospels and Ancient Writings

Evans also discusses the number of manuscripts in the first few centuries of the church and how this compares with other classical texts:

There are some fifty manuscripts that date before AD 300. Of course, we have the great Codex Sinaiticus and Codex Vaticanus, which contain the four Gospels, minus some well-known glosses (such as Mark’s Ending [16:9–20] and John’s story of the woman caught in the act of adultery [7:53–8:11]). These codices are dated to about AD 340. This means that we have the complete text of the four New Testament Gospels preserved in documents about 270–280 years removed from the autographs, that we have substantial portions of the text of the Gospels preserved in documents about 130–200 years removed from the autographs, and that we have tiny portions of the text in perhaps as many as one dozen documents about 70–120 years removed from the autographs. All in all, this is not a bad record. Compared to many of the classical writings and histories, where in most cases there are gaps of 800 to 1,000 years or more between the time of the author and our oldest surviving copy of his manuscript, it is an excellent record indeed.

Although it is only 107 pages, Evans and Ehrman discuss discrepancies in the Gospels, memory studies, extra-biblical sources for Jesus, and much more. There is a helpful question and answer section at the end.

Overall, if you are interested in the contemporary debate over the reliability of the Gospel accounts of Jesus, this book will be a valuable resource in your library.