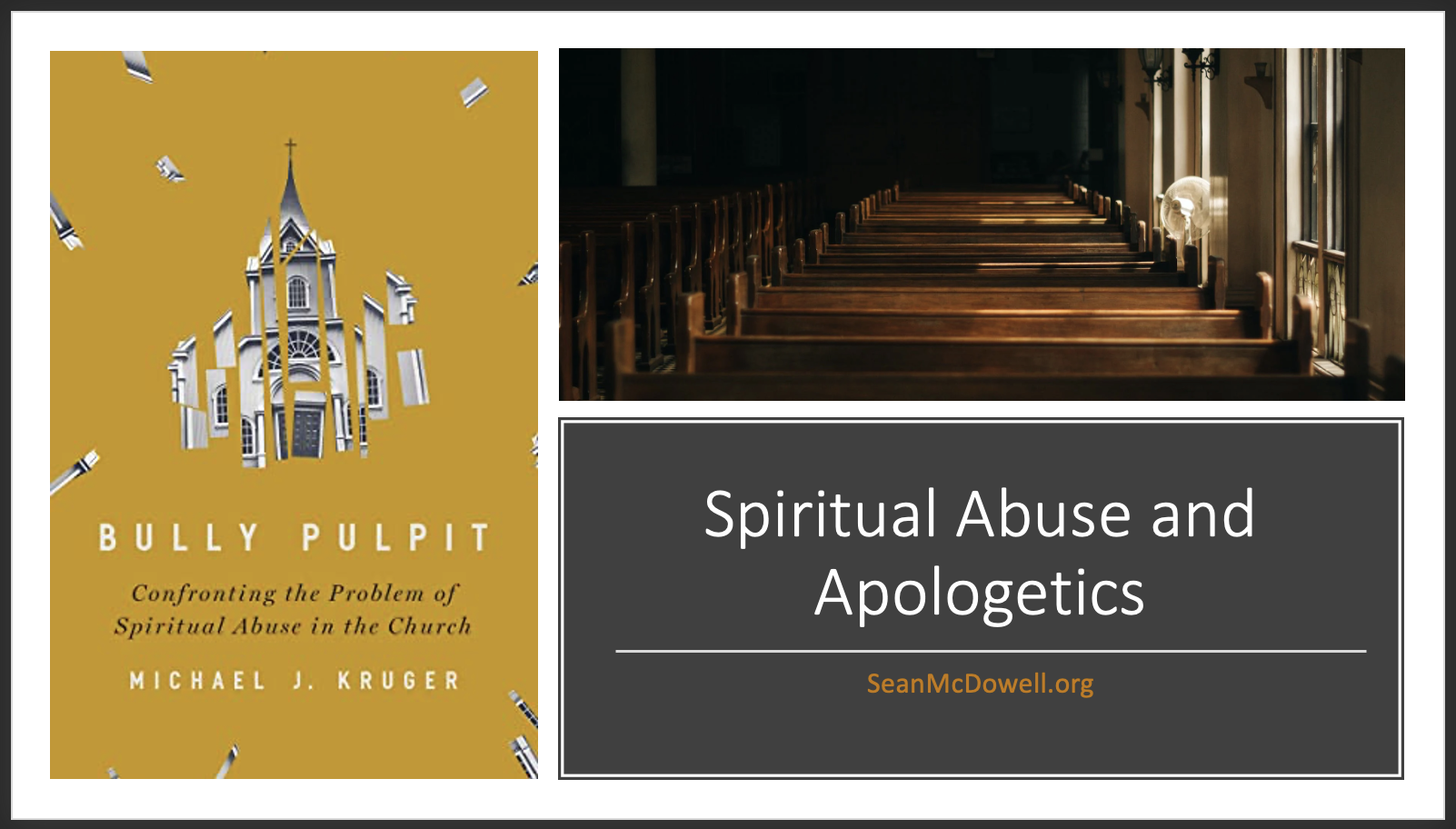 Apologetics and Spiritual Abuse in the Church (Interview with Michael Kruger)

Dr. Michael Kruger is a leading New Testament scholar today. Recently, he has stepped outside his normal lane and published an OUTSTANDING book on spiritual abuse called Bully Pulpit: Confronting the Problem of Spiritual Abuse in the Church. It is one of my top recommendations from 2022. Check out our brief interview and please consider getting a copy of his excellent book and discussing it with others.

SEAN MCDOWELL: Your recent book is on spiritual abuse in the church. Some might criticize you for unduly airing the church's "dirty laundry." How might you respond?

MICHAEL KRUGER, Ph.D.: Let me say that I understand the concern behind such an approach. We believe the church is vital in the life of every believer, so we don’t want to dissuade people from being involved. And it’s easier than we think to become disillusioned and jaded about the church. We have to be careful we don’t slide, perhaps imperceptibly, from constructive critiques toward unbridled cynicism.

Yet, the opposite problem is a danger too. Fear over unbridled cynicism has caused some to put on the blinders, refusing to see and acknowledge the problems that are really there. We can convince ourselves that loving the church means we keep our mouths shut about her weaknesses.

MCDOWELL: How is spiritual abuse different from other kinds of abuse?

KRUGER: In years gone by, the church has begun to grow in its awareness of both sexual abuse and physical/domestic abuse. It took us a while to recognize the breadth and depth of these issues, and I am thankful to see some progress is being made.

However, I think we still have some work to do in both of these areas. But these types of abuse should be distinguished from spiritual abuse (although sexual abuse and spiritual often go hand-in-hand). Spiritual abuse can be defined as abuse that takes place when a Christian leader wields his spiritual authority in such a way that he is harsh, domineering, heavy-handed, and authoritarian to those under his care.

In short, spiritual abuse is a violation of 1 Pet 5:3 which calls Christian leaders to shepherd their flocks “not domineering over those in your charge.” This explains why the term “spiritual” is used. This kind of abuse takes place when a person in spiritual authority abuses that authority and mistreats people under their care. And it is precisely this feature that makes spiritual abuse so damaging. It’s one thing if your boss mistreats you at work. It’s an entirely other thing if your pastor mistreats you at church.

MCDOWELL: How does spiritual abuse uniquely affect someone's faith? Do you think spiritual abuse is a significant reason why many people leave the church and sometimes the faith too?

We are just beginning to learn how deep and wide the effects of spiritual abuse can be. Due to the fact that it is perpetrated by one who represents God in some way, it can wreak havoc on someone’s emotional, spiritual, and even physical life. Those who’ve experienced such abuse often experience fear, anger, shame, anxiety, and even depression. They also deal with loneliness and isolation because they are often driven out of the churches they love. It can also lead to health problems like insomnia, high blood pressure, tremors, and auto-immune disorders.

But the biggest problem is the spiritual damage that is done. People are suspicious of the church, they want to stay away from Christian activities, they lack trust in Christian leaders, and they begin to doubt the goodness and truth of Christianity. I don’t think it is coincidence that we’ve seen an increased awareness of abuse in the last number of years along with an increase of people “deconverting” and leaving the faith.

MCDOWELL: What advice would you give to apologists, and other Christian leaders, who want to stand against spiritual abuse and also bring genuine healing to those who have church hurt?

Apologetics has a number of dimensions to it. Certainly, it involves intellectual questions. But it also involves moral questions. And anyone paying attention over the last decade knows that the primary objection to Christianity is ethical—it is that Christianity (and Christians) believe and behave in such ways that are morally objectionable.

Thus, if we are to effectively make the case for the Christian faith, we have to address the abuse issue in the church. We have to acknowledge the problem rather than minimize the problem. And we have to demonstrate that true Christianity is against abuse in all forms, and actually gives people the moral and ethical foundation for why abuse is fundamentally and objectively wrong.