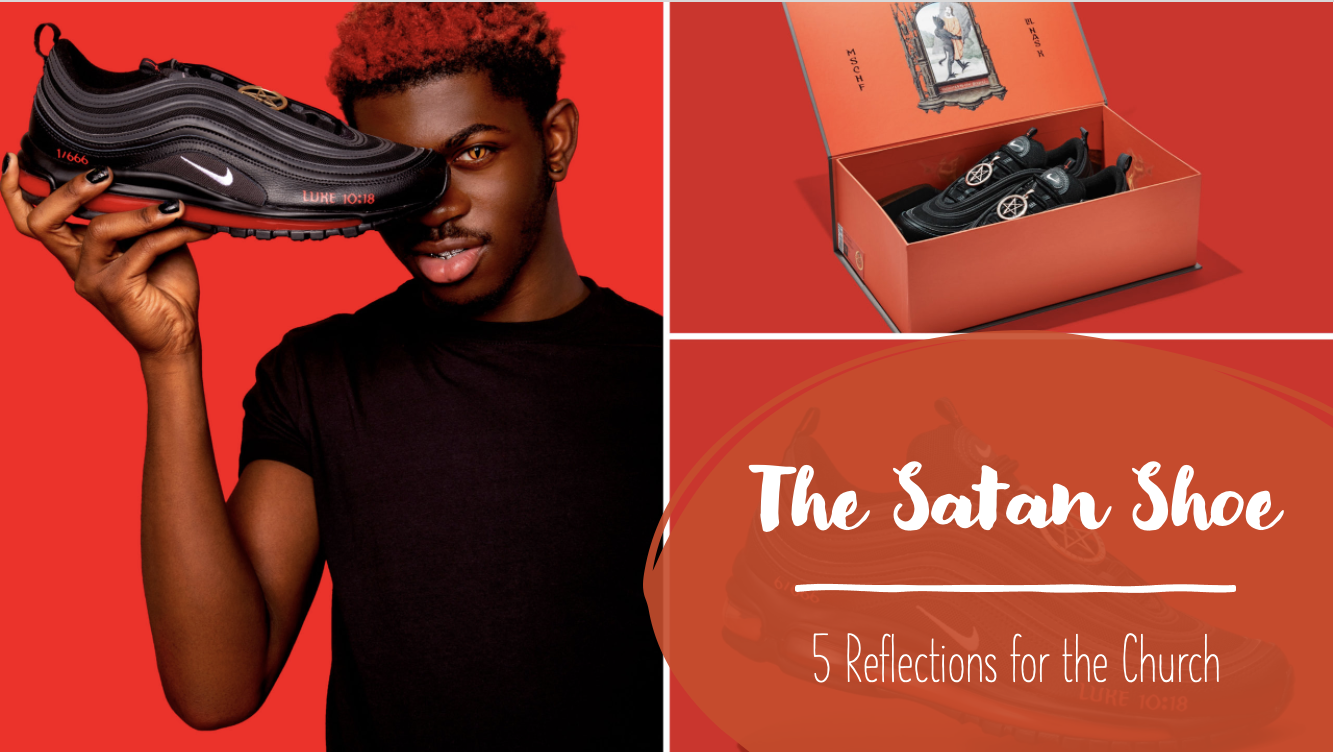 5 Ways Christians Should Respond to the "Satan Shoe"

Rapper Lil Nas X just released a “Satan Shoe,” which is a customized Nike Air Max ’97 with 666 emblazoned on the side, a bronze pentagram attached to the laces, and a drop of human blood in the air bubble. It has created quite the stir of controversy across the Internet.

The question we need to ask is, “How should thoughtful Christians respond?”

I don’t pretend to have all the answers. But here’s five ideas for reflection.

Lil Nas is clearly using these sneakers to market his new song, and given the coverage of this issue, his approach seems to be working quite well. He even posted a fake apology on his YouTube channel, which shows him pretending to apologize and then cuts to a clip from his latest song, Montero (which is extremely graphic). The description below the video links immediately to the song "Montero (Call Me By Your Name)," which reveals, quite obviously, that his primary goal is to draw attention to his music.

2. Pay Attention to What This Reveals

The “Satan Shoe” is quite revealing about where we are as a culture. Personally, I am not that surprised by its release. Because of the promotion of self-aggrandizement and self-glory in our culture, people are increasingly adopting the idea that any attention is good attention. “Do whatever it takes to get views,” is the anthem of a generation. Should we really be surprised someone uses a “Satan Shoe” to shock, offend, and draw attention to their music?

The content of the song (which the shoe is meant to draw attention to) is also quite revealing. In a CGI-laden video, Lil Nas X leaves the Garden of Eden to Ancient Greece, and then pole-dances down to hell, in which he gives Satan a lap dance before killing him and taking his horns.

One critic tweeted, “Lil Nas X is praised for dancing on Satan. Kanye West is bashed for giving his life to Christ. Welcome to 2021.” The nature of the song, and the response to it, reveals how many in our culture are increasingly rejecting traditional Christian values and embracing a moral ethic that seeks power and identity through living out unrestrained sexual desires. The video opens with this line: “In life, we hide the parts of ourselves we don’t want the world to see. We lock them away. We tell them no. We banish them. But here, we don’t.”

Some Christians initially responded by calling for a boycott of Nike. While there may be independent reasons to boycott Nike, I am not sure this is one of them. Because of the negative publicity this has brought, Nike is suing the New York based company MSCHF for copyright infringement. In the future, we ought to wait for the facts before rushing to judgment.

4. Use This as A Mirror to Examine Yourself

It seems that Lil Nas was not taught a biblical sexual ethic with grace and love. “I spent my entire teenage years hating myself because of the shit y'all preached would happen to me because i was gay,” he tweeted, “So i hope you are mad, stay mad, feel the same anger you teach us to have towards ourselves.” I don’t know the details of his teenage life. And my point in raising this is not to excuse his behavior. Far from it. And I do realize that many people consider the Christian ethic itself hateful and bigoted regardless of how lovingly it is taught.

But I also can’t help but wonder if his story would be different had he experienced genuine Christian love. Maybe he did. Regardless, shouldn’t we at least take a hard look inside, as believers, and ask if we are truly showing the love of Christ to the LGBTQ community. Based on many of the responses I have seen from self-proclaimed Christians, we have a way to go.

5. Use This as An Opportunity to Teach Your Kids

Finally, this is an opportunity to talk with kids about Satan’s real strategy. Unlike the approach of Lil Nas, Satan is much more crafty and subtle. He doesn’t have horns. And he doesn’t dress in red. In fact, the Apostle Paul said Satan “disguises himself as an angel of light” (2 Corinthians 11:14). In other words, Satan pretends that he stands for good. And he is subtle and crafty. When tempting Eve, Satan twisted God’s word to imply that they couldn’t eat from any tree rather than just the one in the middle of the Garden.

Lil Nas has tried to distance himself from the negative message it may send to children. It’s not his job to raise kids, he claims, and "there is a mass shooting every week that our government does nothing to stop.” Further, "me sliding down a cgi pole isn't what's destroying society." There certainly are other big issues to address, but given how many millions of kids followed him after his hit “Old Town Road,” he’s not off the hook for the message he sends and we need to help kids process it through a biblical lens.

Obviously much more could be said. But I hope this helps bring some discernment for how we can speak about this lovingly and truthfully with our neighbors and use it as an opportunity to train our kids.

May God help us.

If you are looking for a resource to help teenagers develop a biblical view of sex, love, and relationships, check out my latest book Chasing Love.