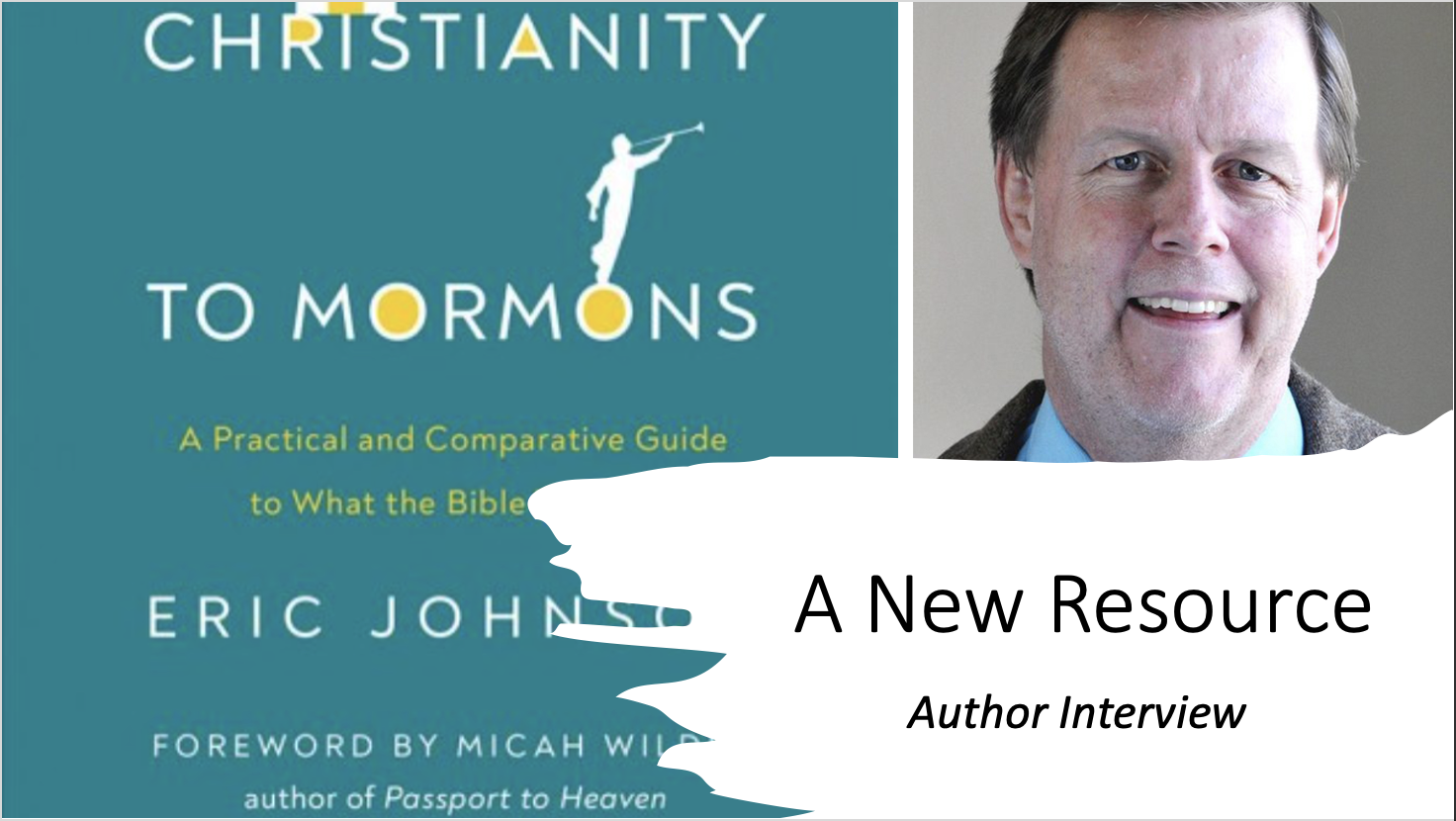 Eric Johnson is a missionary in Salt Lake City with the Mormon Research Ministry, which is my go-to ministry for resources on reaching members of the Church of Jesus Christ of Latter-day Saints. We co-edited a book together called Sharing the Good News with Mormons. He has a new book called Introducing Christianity to Mormons. Check out his responses to a few of my questions and consider getting a copy of his excellent new book.

SEAN MCDOWELL: You’ve been studying Mormonism for four decades as a Bible teacher and missionary. What changes have you seen in the LDS church in that time?

ERIC JOHNSON: For one, members of The Church of Jesus Christ of Latter-day Saints want to be known as “Christians” just like you and me. Unfortunately, Sean, this ends up becoming more confusing than anything since Mormonism denies or distorts every fundamental teaching of the historic Christian church. I don’t normally come out and tell a Latter-day Saint that he or she is not a Christian because it’s an invitation for an argument.

But when the issue is brought forth by the Mormon, I may bring up a teaching that I know we have disagreement, such as Jesus being the spirit brother of Lucifer rather than the second member of the Trinity, God in the flesh. By bringing up an example like this, it can be shown that our view is very different. Another change is that some Mormons today, especially younger folks, are very postmodern in their thinking, causing them to even deny important teachings given by their leaders or scripture. Thus, we need to be careful not to tell Latter-day Saints what they believe but rather ask them. This is polite and can lead to more fruitful conversations.

SEAN: Your book is about introducing Mormons to Christianity. In your experience, are Mormons open to these kinds of discussions? Why or why not?

ERIC: Oftentimes, no. There are many Mormons who would rather just leave the topic alone and not engage. However, during the past decade we have seen a mass exodus of Mormons leaving the LDS Church for a variety of reasons, including historical/doctrinal matters as well as progressive issues such as LGBTQ+ and feminism.

For Latter-day Saints who are willing to discuss the differences or for those who have left the church and don’t know what to believe, I believe this book can be very helpful for the Evangelical Christian who would like to best present Christianity’s essential beliefs in a way the average Mormon can understand. One tool available in the back of the book is a glossary of terms Christians and Mormons share. Understanding the differences in what we mean when we use words such as “God the Father,” “scripture,” or “grace” is crucial to foster real communication while not merely talking past each other.

SEAN: You discuss biblical archaeology. How does the archaeological records compare and contrast between the Bible and the Book of Mormon? Is it helpful to bring this up in conversation?

ERIC: Let me give you an example, Sean. The city of Lachish in western Israel was destroyed by King Sennacherib of Assyria around 700 BC. His soldiers built an earthen ramp so they could climb over the city wall and enter this city to conquer it. This was the same time that King Hezekiah’s men were building a 1750-foot tunnel from a pool outside the city gates of Jerusalem to secretly bring water into the city in preparation for the inevitable invasion by Assyria. You can visit both sites today!

The Bible teaches that tens of thousands of Assyrians were destroyed by the Angel of Death before they had a chance to attack Jerusalem. Yes, I can’t prove that it was the Angel of Death or show you bodies of the soldiers, but it would be strange that Sennacherib systematically decimated dozens of cities in the southern kingdom, one by one, and then left the capital city alone—it would make no sense. Bottom line, there is no archaeological evidence for the history and events that supposedly took place in the Book of Mormon, with some Mormons such as Glenn Beck claiming that what took place occurred in North America while most scholars point to Central America.

SEAN: Christians also have some misconceptions about the LDS church. What are some common things Christians often get wrong?

ERIC: For one, they may assume that Latter-day Saints are not willing to discuss the issues that divide us. While many may be close-minded, others are not. Suppose you meet someone at work or school who is a Mormon. Your conversations can include how they are doing, what is happening in their family, or what they did on their vacation.

When the time is right, maybe you can ask, “I’m curious, you’re a member of The Church of Jesus Christ of Latter-day Saints, correct? I’m wondering what you think about…” You could ask them about what they think is required to get the very best their religion has to offer, what they think about the Bible, or what it means for them to say Jesus is their Savior (which they will easily agree to!). In addition, you could ask, “Have you ever heard the Gospel explained from a Evangelical Christian such as myself?” If they agree, keep your description to 3-4 minutes (it takes practice). Few Mormons have ever had a clear but concise presentation of the Christian Gospel.

SEAN: How do you envision people using the book? And what makes it unique?

ERIC: It’s unique because it is not focused on merely describing the doctrines of Mormonism, per se. Rather, the intention is to lay out the essential teachings of Christianity to someone with an LDS worldview. Too often I have heard Mormons say, “Instead of criticizing my religion, why don’t you tell me what you have to offer?” It’s a good point. Yes, we do need to explain our differences—after all, understanding what LDS leaders and scripture teach is important for proper communication to take place.

But we are not merely wanting Latter-day Saints to leave their church for atheism, agnosticism, or nothing at all, which happens 45% of those who leave this church, according to one 2019 survey. That same survey also shows that only 10% end up becoming Evangelical Christians, which is paltry if you ask me. All in all, we should be able to help the Latter-day Saint destroy false ideas they may have about what Christianity teaches, including the Trinity or salvation by grace, and encourage them to at least consider the case for the biblical Christian position. Finally, there are real-life examples described in each chapter to show how the information can be used, which I think is helpful.