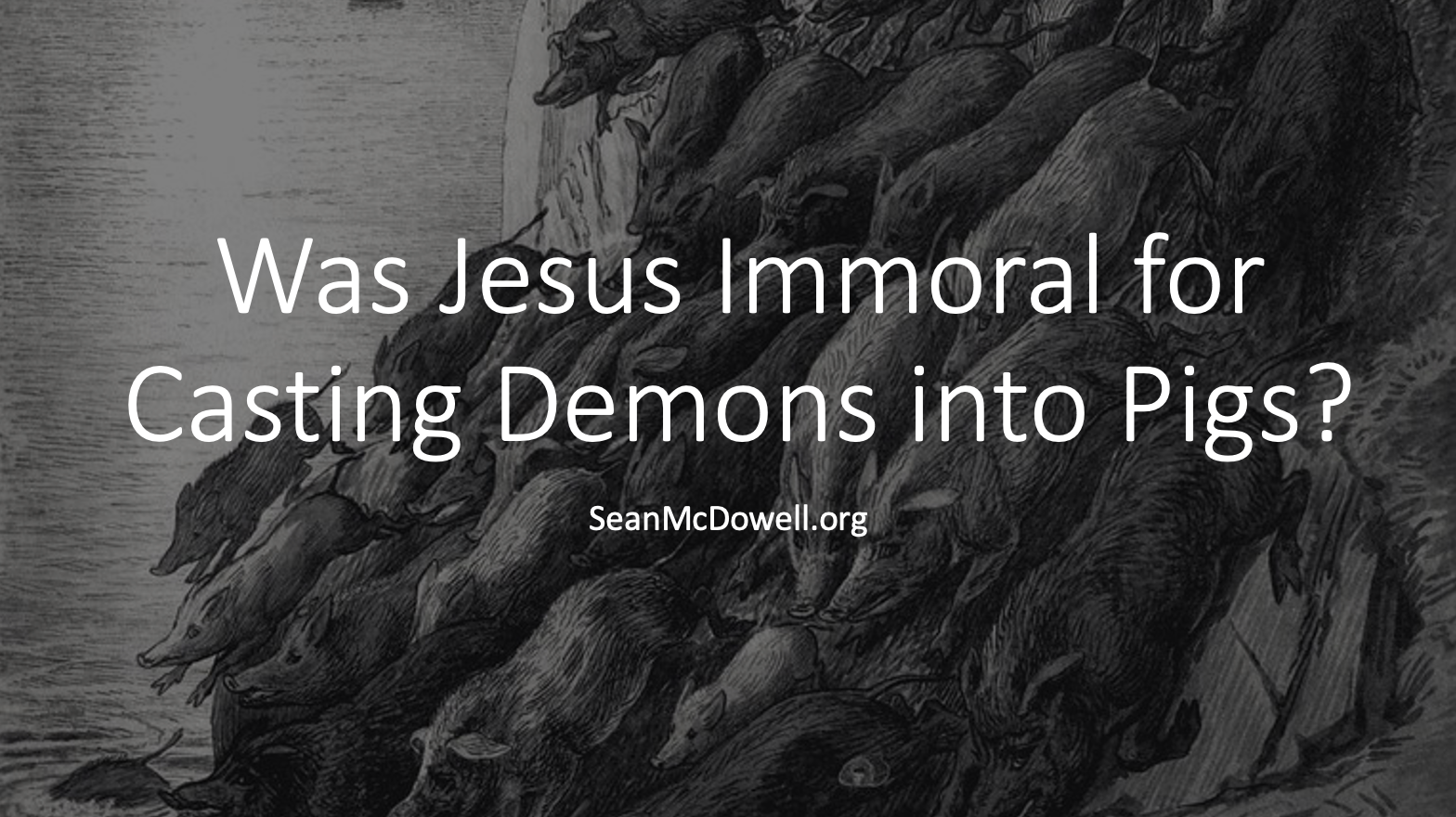 4 Reasons Jesus Cast Demons Into a Herd of Pigs

In my recent “Atheist Encounter” video, I argued that Jesus was immoral for casting a legion of demons into a herd of pigs. Couldn’t Jesus have found another way than drowning a herd of pigs in the sea? While I made a response video to the role-play, I did not address this particular issue.

Since I have received a barrage of questions about it, here are some thoughts:

All three Synoptic Gospels record the story of Jesus traveling with his disciples to the region of Gerasenes, alongside the Sea of Galilee (Matthew 8:28-34; Mark 5:1-10; Luke 8:26-39). They encounter a man possessed by numerous demons who is tormented day and night. He cried out among the caves, and no one could subdue him.

Recognizing Jesus as the Son of God, the demons ask Jesus not to torment them but to send them into a herd of pigs. Jesus obliges and the unclean spirits enter roughly 2,000 pigs who rush down a steep bank and drown in the sea.

This incident raises many questions: Can swine be possessed by demons? Why did the demons make this request? Why did Jesus grant it even though he knew so many pigs would perish? The Gospels make no attempt to answers these questions, so we must do our best to piece together a reasonable response.

I don’t pretend to know exactly why Jesus cast the demons into the pigs, but here are four points that may help.

First, even though we don’t know why Jesus responded as he did, he deserves the moral benefit of the doubt. Why? Jesus has given the world its greatest ethical teachings including the Good Samaritan ethic (Luke 10:25-37), the command to pray for one’s enemies (Matthew 5:44), the charge to care for the marginalized (Luke 4:14-30), and the example of laying down one’s life sacrificially for others (John 15:13). His teachings have inspired great moral reformations such as abolition of slavery and the Civil Rights movement. Jesus deserves the benefit of the doubt even when we don’t have all the facts.

Second, while the death of the pigs is clearly an economic loss for the owner, Jesus is illustrating the infinite value of human life. The demons identify themselves as “Legion,” which would cause first-century readers to think of a Roman legion, which was made up of 6,000 soldiers. This man was absolutely tormented day and night by an immeasurable force of evil. Even though it is fair to ask why Jesus allowed the pigs to perish, we must not miss the powerful miracle of Jesus liberating a suffering human being.

Third, Jesus may have been foreshadowing the fate that awaits Satan and the demons. We are not told exactly what happened to the demons after the pigs drown, but they may have been banished to hell. At the very least, the story suggests that they were disabled from causing more harm.[1] To a group of people who formerly who experienced oppression from evil spirits firsthand, Jesus was stirring them up to consider that an even greater power controls and judges the universe.

Fourth, this incident helps reveal the true identity of Jesus. For Jesus to cast out a legion of 6,000 evil spirits reveals his unparalleled power. Demons were often cast out through magical incantations, or by praying to God for intercession, but Jesus cast them out through his own power. Jesus is far superior to prophets, teachers, and rabbis. If the demons recognize that Jesus as the Son of God, shouldn’t we?

If you are looking for a book that makes the historical case for the reliability of the Bible, the deity of Christ, and the Resurrection of Jesus, check out the updated Evidence that Demands a Verdict (co-written with Josh McDowell)