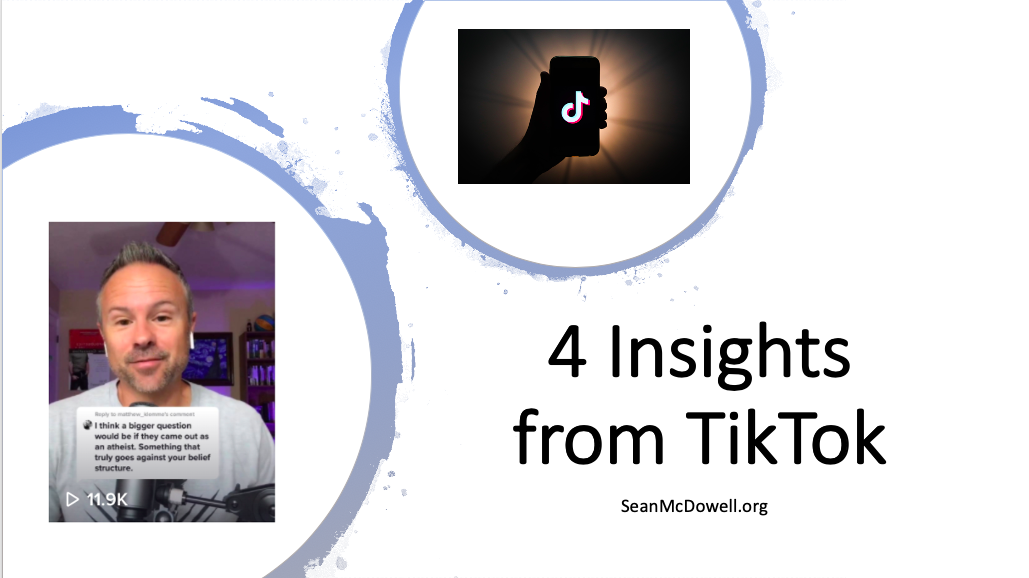 4 Insights from Being on TikTok

When the quarantine began, my 16-year old son said, “Dad, you need to get on TikTok.” So, after doing some research, I decided to follow his advice.

I started an account in which I make some fun videos such as singing with my daughter, playing one-one-one basketball with my son, posting my favorite Marvel clips, but also giving one-minute answers to tough questions such as the following:

TikTok now has over 800 million users and 41% of them are between 16-24. It has become one of the most popular apps among teens. Some even claim that TikTok users sank the most recent Trump rally.

Personally, I post about 1-2 videos per day and have posted over 100 videos total. Some people commit much more time than I do, but I have found TikTok a worthwhile audience to engage a new audience of students, although I totally understand the concerns.

So, why get on the app? There are two big reasons for me. First, students are using the app. If you want to engage students, TikTok is one of the prime places they are currently spending a lot of time. Second, Muslims, Mormons, atheists, and many others are using the platform to spread their views as well.

Here are four quick takeaways from my experience on TikTok:

1. Many young people are doing apologetics on TikTok. For example, one teen girl does regular videos engaging some of the most pressing apologetics issues today such as gender issues, abortion, the afterlife, and so on. She quotes Ravi Zacharias, John Lennox, and other leading apologists. If you are interested in how this generation thinks and communicates, it’s worth watching a few videos to see how she engages her peers.

2. TikTok dads are a real phenomenon. There are dozens of dads who post videos for students, and many of them get hundreds of thousands of hits. Kids seem to love these videos, which tells me there are many young people yearning for a father. Many of these dads (such as my friend John Hossler) tell cheesy dad jokes, do fun videos with their kids, and even teach kids basic lessons like how to tie a tie. Here is one of my big takeaways from this phenomenon: There are many hurting kids in this generation who wish they had a caring, involved father.

3. We have a long way to go in training young people how to think. There are certainly some young people who engage TikTok well. Some ask good questions. Some treat others with kindness. But many young Christians on TikTok lack the training and ability to thoughtfully and respectfully engage others. My point is not to be overly critical, because I love how eager many students are to defend the faith. But they need seasoned apologists to train them in both the content and methodology of doing evangelism and apologetics.

4. Some people are doing apologetics well. Recently I came across a Chaldean priest who defends and articulates his faith. He’s funny, thoughtful, and gracious towards others. While I have some different beliefs than him, he seems to be using the platform effectively in his engagement of young people. There are some people who have figured out how to do creative apologetics on TikTok, and it’s fun to watch.

If you want to learn how to engage a new generation of young people, check out my latest book with J. Warner Wallace: So The Next Generation Will Know