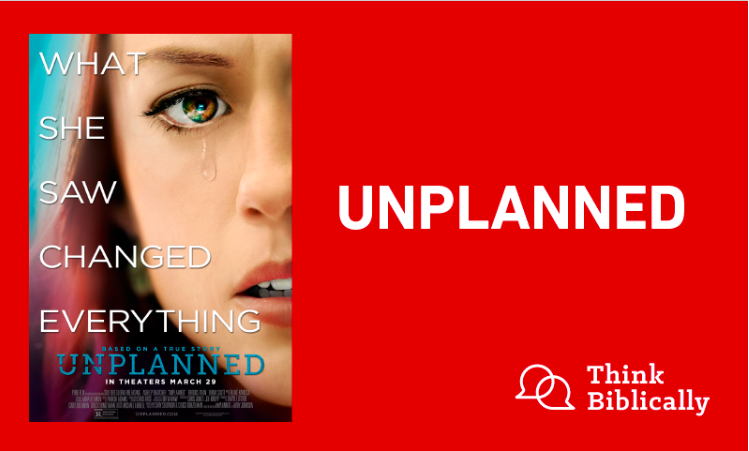 Last night I took my wife and 11-year old daughter to see the movie Unplanned. The first reason is because it’s important to support quality films like Unplanned that tell provocative, life-changing stories. If you haven’t seen it yet, please consider making time. Seriously. Stop what you're doing, pick up your calendar, and find time to see it. I am glad I did.

Second, it was an opportunity to talk with my daughter about abortion. As J. Warner Wallace and I suggest in our soon-to-be-released book So The Next Generation Will Know, look for occasions to engage your kids in discussions about worldview. Unplanned provides a remarkable opportunity to discuss the medical, moral, and cultural issues surrounding abortion through the lens of a powerful, grace-filled story.

Much could be said about the movie. The bottom line is that I loved it, although given how heart-wrenching it is, I may not see it again for some time. The acting was solid, the characters had emotional depth, and the producers represented people on all sides of the debate with accuracy and charity. As one tweet said regarding the film, if they hadn’t represented Planned Parenthood fairly, the movie producers would be sued for character defamation. And yet the silence is deafening.

Along with telling a great story, the movie points out all sorts of tensions in the pro-choice position. Three are worth mentioning. First, as many others have observed, a 13-year old girl cannot see the movie without an adult, since it is rated R, but she can get an abortion without parental permission. I asked my 11-year old daughter what she thinks about this and she said, “So they think it’s worse to see a fake act of abortion on screen than to actually have one. That’s nuts.”

Second, the movie portrays a baby shower for Abby Johnson in the Planned Parenthood clinic (while she was the director at Planned Parenthood) after a long day in which dozens of abortions were performed in the same clinic. The movie does not demonize the workers, but simply portrays the cognitive dissonance (and blindness) many pro-choicers must adopt to simultaneously destroy and celebrate unborn life.

Third, the Motion Picture Association of America gave Unplanned an R rating. This strikes me as curious. After all, movies get an R rating for four reasons: sex, nudity, foul language, and violence. Of these four, Unplanned has only violence, which is an abortion scene depicted through an ultrasound.

But here’s the oddity. According to Hollywood, abortion does not involve the destruction of a human life, but merely the removal of tissue. Thus, if abortion is merely a surgical procedure, why would it be considered an act of violence? But on the other hand, if it is an act of violence, then the unborn cannot be considered merely a blob of tissue.

Much more could be said about the movie. I really hope you will go see it soon. In the meantime, check out the interview with Robia Scott, one of the lead actresses in the film, on the Think Biblically podcast.