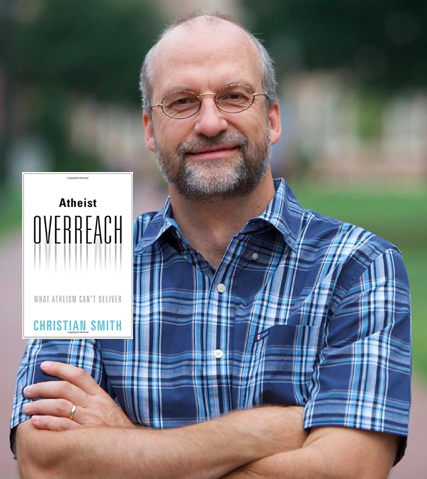 Sociologist Christian Smith has recently weighed into the cultural conversation about secularism and religion in his latest book Atheist Overreach: What Atheism Can’t Deliver. The purpose of the book is not simply to critique atheism as fundamentally right or wrong, but to highlight key unsubstantiated claims leading atheist activists often make about morality, science, and human nature. His goal is to bring clarity and honesty to the debate rather than to “win.”

In doing so, he raises three moral questions that atheism cannot sufficiently answer. His point is not that atheism is false, but that atheist activists overreach the resources of their worldview and make claims they do not adequately substantiate.

Question #1: What is the basis of the obligation to promote the good of all other human beings? In his careful analysis of the writings of leading atheist activists, Smith notes that they frequently make universal claims about moral obligation to other humans. Smith understands how atheism can provide a basis for being good to a limited set of people, but what moral obligation is there, on atheism, to be good to everyone?

Greg Epstein, for instance, claims that humanists are committed to treating every individual as having inherent worth and dignity. But where does this universal worth and dignity come from when? After all, in the atheist worldview, humans are merely the product of a blind, purposeless, material process. Smith concludes:

“I think that atheists are rationally justified in being morally good, if that means a modest goodness focused primarily on people who might affect them and with a view to practical consequences in terms of ‘enlightened self-interest.’ ‘Good,’ however, has no good reason to involve universal moral obligations. Atheists who wish to promote ‘being good without God,’ if they are intellectually honest, need to scale back their ambitions and propose something more defensible, forthright, and realistic than what these moralists seem to want” (p. 25).

Question #2: Why should people follow moral codes consistently when it is not in their self-interest to do so? In other words, why not let everyone else follow the moral code, but when it conflicts with your self-interest, cleverly chose otherwise? Individual and collective interests do come into conflict. It is certainly in the best interest of society for most individuals to follow the moral code, but (morally and practically speaking) why shouldn’t an individual “work” the system and disobey when convenient?

This is not a new question, but one addressed by thinkers as influential as Plato and David Hume. It is not enough to tell the rebel that he may feel guilty, because if there is no objective moral law beyond culture, then he can find another way to ease his conscience. And it is not enough to appeal to the good of society because that would beg the question in favor of the very moral obligation that needs grounding.

Smith recognizes that theistic religions have resources to account for moral obligations even when people can trick the masses. But in terms of atheism, he concludes:

“My point is simply that nobody in an atheist universe confronts a good reason not to free ride morally under the right conditions, if they so desire, because atheist moralists do not possess such a good reason” (p. 32).

Why not? The answer, concludes Smith, is found in considering the nature of reality according to naturalism:

“It is not clear that in a naturalistic universe there are normative sources that exist apart from people. Matter and energy are not a moral source. They just exist and do what they do. The natural processes that govern the operation of the cosmos are not moral sources. They are simply the givens of physics and mathematics, elemental facts of natural reality lacking inherent meaning or purpose or normativity. Positive and negative electrical charges do not attract one another because that is right or just, they do so simply because that is simply how they work. The evolutionary development of substance and life forms is not a moral source. These also just happen as they happen. What then in naturalism’s cosmos could serve for humans as a genuine moral guide or standard, having a source apart from human desires, decisions, and preferences and thus capable of judging and transforming the latter. I cannot think of any” (p. 69).